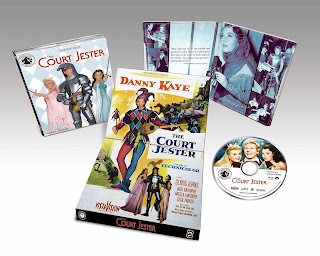 This is the type of film the Paramount Presents series should give us more of...truly iconic selections from the studio’s entire history, not just the ‘80s and ‘90s. I especially like this release because my favorite aspect of the series has so-far been the slipcases that fold-open to reveal the original poster art, which for the older films is a reminder of the beautiful hand-painted work you just don’t see in modern one-sheets.

As for the film itself, I was never much of a Danny Kaye fan, but must also confess I’ve only seen a small handful of his movies. He always seemed a little too...theatrical, for my tastes, with an acute awareness of his own performance. This was my first time watching The Court Jester, mostly out of a sense of obligation for the sake of this review. And indeed, Kaye’s insipidly bubbly title song - as he danced & pranced like an overreaching high school thespian - didn’t instill me with much confidence that the film would be anything but a chore, the kind of flick music teachers make their students sit through.

However, The Court Jester turned out to be terrific fun, mostly because of the star himself. Sure, the songs are silly and Kaye cranks the ham up to broil while performing them. But everywhere else, he’s genuinely funny, displaying a indelible gift for rapid-fire, tongue-twisting banter and elaborate physical comedy. He shines as Hubert Hawkins, a cheerful minstrel who ends up helping the Black Fox - a Robin Hood-like outlaw - overthrow illegitimate, tyrannical King Roderick (Cecil Parker) by protecting a baby who’s the true heir to England’s throne.

A set of amusing circumstances has Hubert gaining entry to the castle by posing as newly hired jester, Giacomo. However, the real Giacomo is an assassin hired by Lord Ravenhurst (Basil Rathbone) to kill Roderick. Ravenhurst thinks Hubert is Giacomo, while Hubert assumes Ravenhurst is his rebel contact inside the castle, and the scene where they conspire together is a classic piece of mistaken identity. At the same time, Roderick’s amorous daughter, Gwendolyn (Angela Lansbury) becomes convinced Hubert is the love of her life, foretold by the royal witch (Midred Natwick), who puts an amusing spell on him. Hubert, however, only has eyes for Maid Jean (Glynis Johns), a rebel captain who gets kidnapped to serve as a king’s wench.

The story evolves into a massive comedy of errors - with Hubert always at the center - filled with plot twists, misunderstandings, clever wordplay, elaborate slapstick and the funniest sword fight this side of The Princess Bride. Kaye is the undisputed star and the fun he appears to be having is infectious. But he’s not quite the whole show, here. The rest of the cast is also quite good, going the opposite route by more-or-less playing it straight (even during the silliest moments).

Then before I knew it, the movie was over...and way too soon, which was the last thing I expected after hitting ‘play.’ The Court Jester didn’t suddenly make me a Kaye convert, but this is a great film. He’s still the same ol’ Danny Kaye, but that same onscreen persona I found so grating elsewhere is perfect here. Beautifully restored in all its VistaVision glory, this colorful classic might arguably be the actor's magnum opus. As such, it's a worthy addition to the Paramount Presents series. Now if they would only do something about beefing-up the bonus features.

MEE-OW! LIKE BEING TURNED LOOSE IN A BIRD SANCTUARY.
Posted by D.M. Anderson at 9:59 PM