JSA: JOINT SECURITY AREA is a Place Worth Visiting 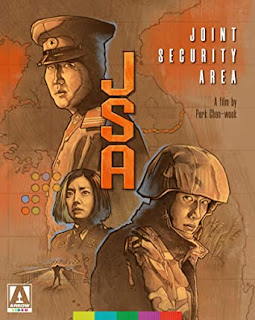 The Joint Security Area of the title is a region which divides North and South Korea. It’s essentially neutral and serves as the spot where the two nations negotiate (when they must). Additionally, it’s the only area constantly guarded by the military on both sides, as well as the setting for a majority of this film, specifically the guard stations located on each side of the “Bridge of No Return.”

It’s also the location for a hell of a murder mystery that’s presented in the opening sequence, where South Korean sergeant Lee Soo-hyuk (Lee Byung-hun) is seen shooting the North Korean soldiers inside their own guardhouse. The incident is shown from a few different perspectives, first with Lee trying to escape after being captured, the second with Lee intentionally entering the building and shooting them in cold blood. Initially, the “mystery” isn’t who, but why, which Major Sophie Jean (Lee Young-ae) is charged with investigating.

Evidence suggests neither account of the incident adds up and also indicates someone else was at the scene, apparently Lee’s friend & subordinate, Private Nam Sung-sik (Kim Tae-woo), who has since tried to kill himself. Taking a cue from Rashomon, we’re then shown what really happened through an extended flashback leading up to the shooting. This is the meat - and more surprisingly, the heart - of the story. After accidentally venturing behind enemy lines, Lee triggers a land-mine but is saved by North Korean sergeant Oh Kyung-pil (the always wonderful Song Kang-ho) and Private Jung Woo-jin (Shin Ha-kyun).

In a surprising narrative turn, these four enemies end up becoming fast friends, regularly meeting at night to drink, play and share their lives. These segments are often pretty amusing and eventually heartwarming. But most of all, because of the performances and attention to character detail, they feel genuine, so when the cause of the shooting is finally revealed, the viewer can’t help but be affected by it. We’re both saddened and angry at how the two countries’ adversarial relationship impacts individual lives.

This is not the direction I thought JSA was going to take. The premise is inherently intriguing and deftly directed by Park Chan-wook, but I totally didn’t expect a middle act that got me so emotionally invested in these four guys. Their friendship ends up being the crux of the entire story and what separates it from a lot of similarly-structured films. If the final image doesn’t get you a little choked-up, you obviously haven’t been paying attention.

Originally released in 2000, JSA was a massive hit in South Korea and a few other countries. Though it has remained relatively obscure elsewhere, the film is certainly worth discovering with this restored Blu-ray release from Arrow Films. With a unique setting, compelling story and terrific characters, this is an all-around winner.

“STEPPING OVER BOUNDARIES” - Brand new interview with Jasper Sharp, who discusses the film, director Park Chan-Wook’s career and the state of South Korean cinema at the time of - and since - JSA’s release.

ARCHIVAL FEATURES - “The JSA Story” (making-of); “Making the Film” (another making-of); “About JSA” (promotional pieces by the main cast).

2 MUSIC VIDEOS - 1) “Letter from a Private” (South Korean song with scenes from the film); 2) “Take the Power Back” (a Rage Against the Machine song with behind-the-scenes footage).

REVERSIBLE COVER - With new and original artwork (we kinda like the original).

MEE-OW! LIKE BEING TURNED LOOSE IN A BIRD SANCTUARY.
Posted by D.M. Anderson at 2:40 PM