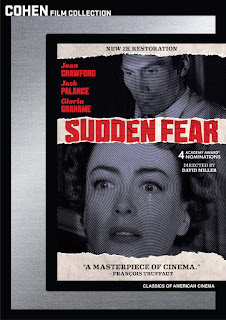 In the opening scene of Sudden Fear, wealthy playwright Myra Hudson (Joan Crawford) is watching rehearsals for her latest play. Unimpressed by budding actor Lester Blane (Jack Palance), she decides he’s simply not suited to be a romantic leading man.

She could just as easily be talking about Palance himself. But unlike Lester, I doubt he ever expected to be. Jack knew his real strength as an actor was being scary as hell...sometimes without even saying anything. His indubitably-intimidating image eventually grew so iconic that it became endearing.

That’s why he’s perfectly cast here (one of his earliest major roles). Though Lester doesn’t get the part in Myra’s play, he doesn’t appear to hold any grudges as he courts, charms and eventually marries her during the film’s first act. However, Palance’s face, eyes and voice provide all the foreshadowing the viewer needs to suspect Lester has a sinister agenda.

And indeed he does. He and gold-digging girlfriend Irene (Gloria Grahame) plan on killing Myra for the millions he stands to inherit. Unfortunately for them, Myra learns of their scheme because she left the dictation machine on in her office. She’s understandably horrified because Lester’s professed love seemed so sincere. I’ve never been a big Joan Crawford fan, but the scene where she’s trying to wrap her head around his true intentions is some of the best acting of her career and where Myra earns all our empathy.

Still, Myra sucks it up and formulates a plan to turn the tables on them before they can arrange an “accident.” Considering she’s often forced to think on-the-fly, Myra turns out to be quite a formidable adversary, often throwing a wrench into Lester and Irene’s plans.

This cat & mouse game sets up a final act that’s brimming with tension, particularly the scene in Irene’s apartment when Myra is forced to hide in a closet after Lester shows up. Deft direction by David Miller and stark black & white cinematography help, but it’s the performances by the two leads that drive the film. Crawford instills Myra with strong resilience despite her constant terror. However, it’s Palance who shines brightest - or darkest? - as only he can. Even before his malevolent intentions are made clear, he’s wonderfully menacing.

Almost 70 years later, Sudden Fear holds up well as an energetic and stylish example of film noir, a must-own for any fan of the genre. Crawford has seldom been better, while Palance is...well, Jack Palance, which is exactly what the film needs. Cohen Media Group previously released it on Blu-ray, but this DVD features the same 2K restoration, as well as the same minimal bonus features, for half the price.