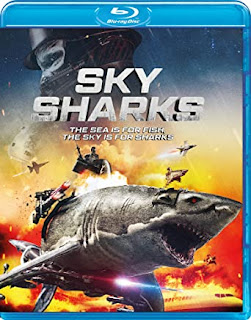 Do I smell an Oscar, here?

Even with 2020 offering significantly less competition than usual, probably not. Still, Sky Sharks might end up being the Gone with the Wind of sharksploitation movies. That doesn’t necessarily make it a great film - or even a good one - but one has to admire its willingness to throw everything at the wall to see what sticks.

Surprisingly, a lot does stick, even if it doesn’t always make a hell of a lot of narrative or logistical sense. There are indeed plenty of flying sharks, as well as an abundance of zombie Nazis, plane crashes, destruction, geysers of blood, disembowelings, dismemberment, boobs o’ plenty, gratuitous sex, techno music, death metal and, of course, Tony Todd.

For what it’s worth, the plot involves the aforementioned Nazi zombies riding jet-powered, genetically-enhanced sharks to attack planes and slaughter the passengers. It’s up to the Richter Corporation - with the aid of the military and various mercenaries - to end their global reign of terror. There are also numerous flashbacks where we learn that these undead soldiers are the result of Nazi experiments during World War II. Though there’s no real main protagonist, one of the “good guys” is a former Nazi who helped oversee the experiment in the first place. How’s that for bad taste?

How the titular fish came to exist is never explained, but do you really care? Anyone still reading this was probably sold on the title alone. But unlike the smug, self-aware silliness of Sharknado and its ilk, Sky Sharks isn’t presented with a nudge-and-a-wink. Sure, it’s goofy as hell, often intentionally. And yeah, the dialogue is godawful, as are some of the visual effects. However, writer-director Marc Fehse (whose name pops up in the end credits for at-least a half-dozen other jobs) compensates with enough soft-core sex, bouncing breasts and over-the-top gore (both practical and CGI) to amuse indiscriminate connoisseurs of cinematic sleaze.

But most importantly, despite a poky middle act with some out-of-place music montages, Sky Sharks is shameless fun...and just in time for Academy consideration. Bloodier and nastier than the usual SyFy channel sludge, it’s the kind of movie you might be reluctant to admit you sort-of enjoyed.

By the way...stick through the end-credits. The film’s biggest intentional laugh comes at the very end.