A TALE OF TWO CITIES: How to Avoid Reading Dickens 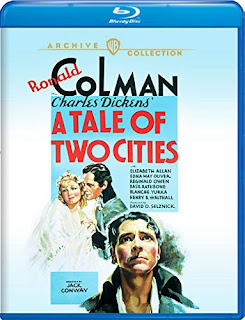 Nominated for an Oscar for Best Picture, this 1935 adaptation of Charles Dickens’ A Tale of Two Cities is generally considered the definitive one and the reasons are obvious. It’s epic in scope, with outstanding direction, production design and performances.

Additionally, this version is arguably the most faithful to the original novel. I should know because I was forced to read the thing in high school. Not to disparage Dickens’ considerable influence on English literature, but his brand of prose was sorta lost on an American 16-year-old more enamored with his Atari 2600. I managed to power through it over a few weekends, but had home video been a thing back then, I could have freed up a lot more Pitfall time by simply popping-in the movie (and I still would have aced the final).

Kids taking English Lit these days don’t know how good they have it.

But A Tale of Two Cities is a lot more than a literary short cut. Eight decades later, I can’t think of a more entertaining way to vicariously experience the French Revolution. Speaking of which, the massive peasant uprising remains the film's technical highlight, with hundreds of extras engaging in close-quarters conflict. The sequence is actually pretty violent for its time and benefits from terrific editing.

Still, it’s the characters that drive the narrative. One might argue that Ronald Coleman is miscast, but I like what he brings to the role of cynical, hard-drinking lawyer Sydney Carton. While providing some welcome levity to the film, it’s a remarkably subtle, affecting performance, particularly during the final act (on an unrelated note, without his trademark mustache, Coleman sorta looks like Hugh Jackman).

You can’t really have a good story without a great villain, and A Tale of Two Cities gives us two. Marquis St. Evremonde (Basil Rathbone) kills a child in his very first scene - the catalyst for the eventual uprising - and remains indifferent to the suffering he inflicts on others. Since his character has relatively little actual screen time, it’s Blanche Yurka as Madame De Farge who really shines, mainly because she actually earns our empathy before the revolution turns her into a sadistic, revenge-obsessed monster.

The whole thing is definitely a lot more fun than plowing through a 300-page, 150-year-old English novel. This version of A Tale of Two Cities is big, exciting and a lot of fun, with great performances and engaging characters. Given a nice Blu-ray transfer, which includes a smattering of fun material from the same era, it’s highly recommended for classic movie lovers and kids trying to pass English with minimal effort.

“AUDIOSCOPIKS” - An interesting short promoting 3-D and demonstrating how it works. Quite fun and a little bit misogynist (hey, it was a different time).