LOVE STORY (Paramount Presents #15) is Iconic, Whether You Like it or Not 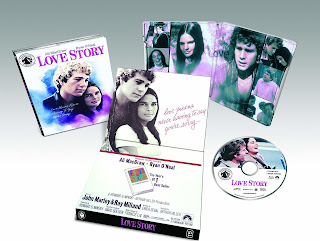 I’ve been covering the ongoing Paramount Presents Blu-ray series with great curiosity, especially since the stated purpose is spotlighting the most iconic or classic films in the studio’s library, remastered and released with new bonus features and packaging.

Some of the selections (The Haunting, The Golden Child) have been...uh, interesting, while others are obvious choices for the deluxe treatment. If there’s one film which inarguably falls into the latter category, it’s Love Story.

For the unenlightened, Love Story was the biggest film of 1970. Adjusting for inflation, it remains Paramount’s sixth-highest grossing film of all time and the 41st biggest from any studio. That’s right, kids...this saccharine little film made more bank than any films in the Lord of the Rings, Transformers and Harry Potter franchises.

Watching the film today, that may be hard to fathom. Certainly a product of its time, Love Story doesn’t come across as anything but your usual case of boy-meets-girl, boy-marries-girl, boy-mourns-girl. There are even times when the film has a similar aesthetic to a ‘70s-era TV movie of the week. But if the film seems unremarkable today, that’s only because it’s the one responsible for nearly every cliche and trope we’ve seen in romantic tearjerkers ever since.

Though still shamelessly manipulative, the film isn’t quite as sappy as its reputation and history suggests. Oliver (Ryan O’Neal) and Jenny (Ali MacGraw) are young, but not “star-crossed lovers.” The quasi-antagonistic banter they engage in throughout the film is down-to-Earth and often quite funny. In fact, the only exceedingly-cloying aspect is Francis Lai’s score, especially the iconic but monumentally-overused love theme. Like all terrible tunes, it might be days before the thing leaves your head.

Since romance has never been my genre of choice, the fact I still found Love Story fairly watchable can be considered high praise. There’s something admirable about its simplicity and eagerness to placate its intended audience. From a historical perspective, of course, the film is essential and it goes without saying that anyone who fell in love with Oliver & Jenny back in 1970 will get a kick out this trip down memory lane.

Like other Paramount Presents discs, Love Story has been nicely remastered and features a small-but-interesting batch of bonus features, mostly about the film’s history and cultural impact.