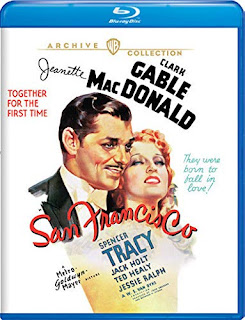 San Francisco is not the first disaster film. 1933’s Deluge probably holds that distinction. However, it’s the first one with all the elements that would come to define the genre...melodrama, subplots, tumultuous relationships, an all-star cast, epic destruction and a narrative blueprint followed by countless other films since, from In Old Chicago to James Cameron’s Titanic.

It’s also the first disaster movie with special effects that are more-or-less convincing. Its depiction of the 1906 San Francisco earthquake - which completely destroyed most of the city - is pretty damned impressive, even today. Buildings crumble, streets split open, fires break out, houses explode. One particularly great scene features destruction and panic inside a nightclub, which appears to have been done completely in-camera. Viewed in the context of when the film was made, the final act is a disaster lover’s dream.

But getting there might take some patience. Like some of the soapier entries in the genre, San Francisco dedicates a great deal of its running time to trials and tribulations of its main characters. The main narrative thread has Clark Gable as Blackie Norton, a devil-may-care nightclub owner who’s smitten with naive new singer Mary Blake (Jeanette MacDonald). With aspirations of becoming an opera star, she’s also being courted - personally and professionally - by unscrupulous bigwig Jack Burley (Jack Holt), owner of the local opera house.

While this little love triangle is sporadically interesting, the numerous musical numbers with MacDonald belting-it-out on stage are repetitive and unnecessarily long. I’d have preferred to see more of the dichotomy between lifelong friends Norton and Father Mullin (Spencer Tracy), a relationship that becomes increasingly strained due to the latter’s disapproval of Norton’s actions regarding Mary. While all the performances are uniformly solid, Gable stands out in particular, conveying Norton’s latent epiphanies with an admirable amount of subtlety.

When disaster finally strikes, it’s with no narrative foreshadowing, catching everyone off-guard...maybe even the viewer. The characters’ personal and legal problems are swiftly shoved aside in a sudden fight for survival (which, I suppose, is what would happen in real life). The quake itself lasts only a couple of minutes, but it’s violent, harrowing and devastating. The massive scale of destruction seen in the aftermath is impressively apocalyptic.

Eight decades later, San Francisco remains great popcorn entertainment, the original template for a genre that would reach its zenith in the ‘70s. It’s been nicely remastered for Blu-ray and features more vintage bonus material than the average Warner Archive release. For anyone who thinks the disaster genre began with Airport or The Poseidon Adventure, consider this film a fun little history lesson.

2 SHORTS - From the Fitzpatrick TravelTalks series, “Cavalcade of San Francisco” and “Night Descends on Treasure Island” both feature the city where the film takes place.

ALTERNATE ENDING - An alternate final shot, which is better than the one included in the film.