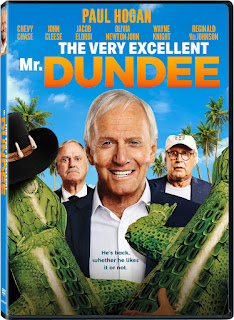 Be aware that this isn't another sequel to Crocodile Dundee, not that anyone was pining for one. It’s been well-over 30 years since that film briefly endeared Paul Hogan to the world outside his native Australia, and nearly as long since most of us have cared about what he’s been up to. But ironically, cultural irrelevance is one of this film’s more amusing running gags.

It’s one element that makes The Very Excellent Mr. Dundee the second-best film to bear the title character’s name. Since Crocodile Dundee’s two official sequels were lukewarm leftovers, that may be faint praise, but it’s still more amusing than I expected.

However, little of it has to do with Hogan, playing a fictionalized version of himself. All that’s really required of him is to act bemused, in his indubitable laid-back manner, as he finds himself in a quick succession of scandals which have thrust him back into the spotlight (but aren’t really his fault). Though occasionally heavy-handed, the film offers a few clever observations about so-called ‘cancel culture,’ as well as public perception of expired pop icons.

While some of the humor stems from Hogan’s former stardom and career decline (such as nobody being aware there was a second Crocodile Dundee sequel), he’s actually the least essential aspect of the narrative. With just a few tweaks to the script, this could be about any forgotten celebrity, such as co-stars Chevy Chase or John Cleese (also playing themselves). But then, that would deprive the film of its most ironic joke: Chevy Chase being depicted as universally loved.

A slew of other famous faces - including several of Hogan’s fellow Aussies - appear in cameos (some through archive footage). In another example of irony, none-other than perpetually stone-faced Costas Mandylor delivers the biggest laugh-out-loud moment. Elsewhere, The Very Excellent Mr. Dundee is seldom hilarious, but it’s generally good-natured and Hogan remains likable. Considering I expected the film to be a sad, desperate attempt to capitalize on a brand name that hasn’t been relevant for decades, that’s quite an accomplishment.

FEATURETTE - Short promo featuring interviews with some of the cast, as well as director Dean Murphy.