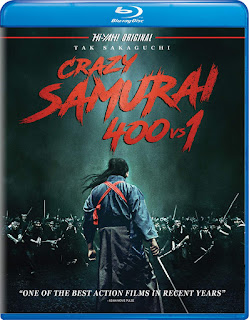 The big gimmick of this title-tells-all film is a 77 minute action sequence presented in one continuous take. Unlike such recent examples as 1917 and Birdman, which masterfully created the illusion of an unbroken shot, Crazy Samurai: 400 vs 1 is the real deal. The sequence is clearly the work of one guy with a camera, whose shadow pops into-frame on occasion. We can even tell when he backs onto a crane to get an overhead shot.

Prior to this sequence is a prologue that attempts to provide context, but anything resembling character development is non-existent. With the help of mercenaries, Chusuke (Kento Yamazaki) is seeking revenge on samurai Musashi (Tak Sakaguchi), who announces his arrival by killing a child, a good indication he’s probably the bad guy. Then Chusuke completely disappears once the fighting starts and doesn’t return until the epilogue, which inexplicably takes place seven years later and makes zero narrative sense.

The next 77 minutes consist of Musashi battling hundreds of faceless henchmen, mostly with his back to the camera (we don’t even see his face for the first 20 minutes). They attack him one at a time and are efficiently dispatched; not once does anyone think to gang-up on him or strike from behind. There’s little in the way of creative choreography or virtuosic swordplay...just guys lining up to be slashed, chopped or run-through before hobbling out-of-frame. One would think the forest floor would be soaked in gore and littered with bodies after awhile, but CGI blood sprays without ever hitting the ground and I’m assuming these guys are lining-up to be sword fodder more than once.

Aside from some rain, there’s no further “plot” beyond this, nor does the film come to any sort of resolution. It’s like watching my daughter play Bloodborne for an hour before she gets bored and quits. But even that game has something resembling a story. All Crazy Samurai: 400 vs. 1 has to offer is the novelty of its gimmick, which wears off after about 10 minutes.