MADAME CLAUDE: Robert Webber Gets His Groove On 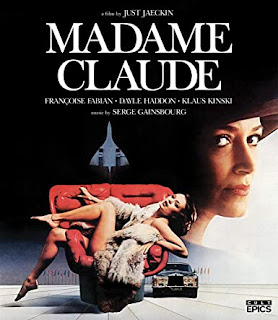 At least Madame Claude starts with a bang...almost literally.

The opening scene features several American dignitaries seated around a table while President Howard (Robert Webber) grouses about the possibility of Japan backing out of a military purchase deal. He then leaves the meeting, telling his staff he’s going to try to fix things. But when he gets to his private office, high-class prostitute Anne-Marie (Vibeke Knudsen) is waiting. Howard decides to temporarily forgo his concerns about Japan to engage in foreign relations of a different sort.

Such a scene is par for the course for director Just Jaeckin, whose greatest claim to fame was legitimizing softcore cinema with Emmanuelle. But what’s surprising is the participation of Webber, the type of respected actor you don’t typically see in a film like this. I, for one, was shocked to witness one of the guys from The Dirty Dozen actually getting dirty. His character’s purpose served - setting-up the perplexing plot - Webber’s five minutes of actual screen time are over. However, he does give the film’s best performance.

The real Madame Claude was a French brothel owner who’d send girls around the world to service wealthy clients, from corporate bigwigs to powerful politicians & mobsters. Here, she’s played by Françoise Fabian, the only woman in the cast we never see naked, presumably because she’s too busy dealing with the police, the CIA and nosy photographer David Evans (Murray Head), who has compromising pictures of her girls canoodling with high-profile clients. Too bad, really, because not-only does Fabian instill Claude with high society sex appeal, the surrounding narrative is so sloppy, convoluted and ultimately boring that I gave up trying to follow it.

On the plus side, legendary loony Klaus Kinski pops-up a few times to engage in some prime scenery chewing...always good for a few shits ‘n giggles. Additionally, the film has been given beautiful 4K restoration for this Blu-ray release, which includes a few interesting bonus features (listed below). Still, I think even fans of Just Jaeckin’s most infamous work would agree that actual storytelling was never one of his strengths. In Madame Claude, not even female eye candy - or Robert Webber getting his groove on - can offset humdrum sex scenes and a muddy narrative that’s afforded too much screen time.

INTERVIEW WITH JUST JAECKIN - A new interview. He seems like a charming fellow.