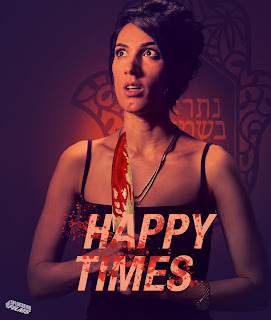 Violent black comedy is hard to pull-off well. Go too dark or extreme and you risk sucking the enjoyment right out of it. Fortunately, Happy Times knows where that line is drawn and never crosses it. That isn’t to say the film pulls its punches. There’s plenty of bold, bloody brutality to be found here, but made palatable by a witty screenplay, amusing characters and a playful tone.

A wealthy Israeli couple sends the kids away for the night to host a dinner party with family members and their spouses. As they gather at this spacious mansion, they engage in small talk that seems deceptively mundane. But right from the get-go, we sense tension bubbling under the surface of nearly every insincere compliment and painted smile. Some of these folks have plenty of skeletons in their closets.

There’s a lot of resentment in the family which eventually rises to the surface, exacerbated by the arrival of Michael (Michael Aloni), a struggling actor who seems to take pleasure in flouting the family’s Jewish traditions. He is also the only completely honest guy at the table. Conflicts soon spiral out of control, with verbal combat escalating into violence for various reasons...misunderstandings, betrayal, sometimes even by accident.

But despite the mayhem, which is often graphic, Happy Times is genuinely funny...especially once the bodies begin to pile up. These people ain't exactly likable, but they’re all well-developed and interesting. When they start to turn on each other, we’re invested enough in a few of them to pick sides. The ensemble cast of actors is uniformly solid, with Iris Bahr standing-out as Hila, the initially-congenial host who's eventually driven to kill.

Despite the L.A. location, this is an Israeli production filmed in English and Hebrew, with characters sometimes switching languages mid-sentence. I don’t know if it was writer-director Michael Mayer’s intention to incorporate both as a commentary on cultural integration, but it does seem to loom large with some characters. Whatever the case, Happy Times is smart, fast-paced, violent fun that strides up to the line without ever crossing it. Like all good black comedies, the film works because it knows when to say when.