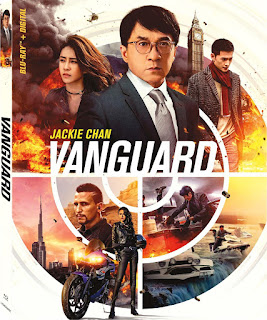 Time catches up with all of us, I guess.

Jackie Chan is 66 and has been acting nearly as long, while mostly doing all his own stunts. He still cranks-out movies by the bushel every year, but ain't the man he used to be. And that's okay. If the man prefers to pass the brawling baton to younger, more agile co-stars, who are we to judge? He’s got nothing left to prove.

But if he's gonna continue making movies, an occasional pretense of effort would be appreciated.

Chan gets top billing in the ironically-titled Vanguard, but you’d be hard-pressed to consider him the star. This is more of an ensemble film with Chan as the leader of a high-tech security company called Vanguard, which protects high-profile clients, or in this case, rescues the daughter of one when she is kidnapped. Chan occasionally engages in the action, but mostly coordinates the rescue from the sidelines while his beautiful-but-bland team do all the grunt work (and have the most screen time).

Maybe that’s because Chan mostly looks like he doesn’t even want to be there. Despite another re-teaming with director Stanley Tong, this is a far cry from their Supercop days. The plot is derivative & lazy, the dialogue (also courtesy of Tong) is pretty terrible and, considering this is supposed to be an action-comedy, most attempts at humor are dead on arrival. As for the characters, they are either walking cliches or display zero personality.

But by far, the worst aspect of Vanguard is the action itself, which grows increasingly ridiculous and not in a fun way. Sure, lots of action movies require a willing suspension of disbelief, but this one abuses the privilege. With the exception of a few neat Bondian gadgets and a not-half-bad opening fight scene, the cartoonish action set-pieces are so far removed from physical reality that they cease to be logistically plausible, exacerbated by some of the worst CGI I’ve seen in a film that wasn’t produced for the SyFy channel.

It used to be that Jackie Chan could elevate mediocre movies into something at-least watchable, using his physical skills, congeniality and comic timing to maintain audience goodwill. But he hasn’t appeared in a decent film for quite some time and Vanguard doesn’t reverse that trend. No one is expecting a return to his glory days, but it'd be nice if he occasionally appeared to be trying.