FREAKY: A Gaggle of Giggles & Gore 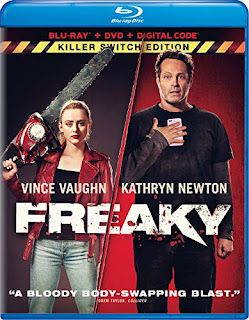 This was originally going to be titled Freaky Friday the 13th, which would have been unfortunate. Sure, the premise is a horror variation of Freaky Friday. And yeah, it’s often extraordinarily funny. But the film isn’t another smug parody, which is a good thing because we already have too many of those.

It sure opens like one, though, with four partying teens getting slaughtered by a serial killer known locally as the Blissfield Butcher (Vince Vaughn). Damn near every slasher trope can be found in the first ten minutes: the urban legend, drinking, premarital sex, eye-rolling “teen talk,” fatally stupid decisions, ridiculous gore and a masked killer in overalls. The kids even overreact as though they’re in a parody.

The tone itself, however, suggests an homage. In fact, Freaky is loaded with references to a variety of horror films, not-so-much poking fun at them as giving respectful tips of the hat. Savvy viewers will spot allusions - subtle and otherwise -  to such diverse films as Carrie and Heathers, to say nothing of the ‘90s horror-revival flicks which obviously inspired writer-director Christopher Landon. The masterstroke, however, was using the classic body-switch premise of Freaky Friday as a clothesline on which to hang everything.

Why didn’t anyone think of this before? Freaky has the heartbeat of a balls-out horror film...suspenseful, atmospheric and loaded with spectacularly bloody death scenes (the wine bottle gag is my personal favorite). But the idea of a bullied teenage girl switching bodies with a sadistic serial killer is filled with inherent comedic possibilities, which the film exploits at every opportunity, with mostly successful results.

It’s been awhile since Vince Vaughn has done a comedy, and longer than that since he’s actually been funny. People tend to forget he also played a variety of villains and killers in the past. Freaky allows him to do both. He’s suitably menacing as the Blissfield Butcher, but absolutely hilarious when he takes on the mannerisms of Millie, a meek & mousy teenage girl. Millie herself is played by Kathryn Newton, who’s equally effective when she becomes The Butcher, though far less comedic. Still, there’s a lot of guilty pleasure to be had in watching “Millie” strike back at her high school tormentors. In fact, both characters end up feeling occasionally empowered in their new bodies.

Whether one considers it a comedy with horrific moments or a horror film that just happens to be really funny, at least Freaky isn’t another parody, nor is it the kind of self-aware meta-horror purveyed in such films as The Cabin in the Woods. With smart writing, amusing performances and a wild spin on a familiar premise, saddling it with a dumb mash-up title like Freaky Friday the 13th would have been a disservice.