Not so RANDOM ACTS OF VIOLENCE 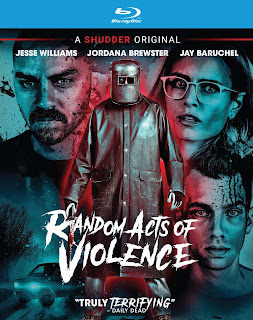 Directed and co-written by actor-comedian Jay Baruchel (he of How to Train Your Dragon fame), Random Acts of Violence is based on a horror comic of the same name. He also casts himself in one of the leading roles, so obviously his heart is in it. I just wish mine was.

I can’t tell you how faithful the film is to its source material, but will say this is not how I would have approached it. Considering the interesting - if somewhat familiar - premise, this could have been a clever, comedic and insightful horror thriller. After all, the whole comic fandom subculture is certainly rife with satiric possibilities. Instead, we get another dreary, routine slasher film.

Jesse Williams is Todd Walkley, creator of a popular comic series called Slasherman, which is inspired by a series of real-life serial murders. Stuck with a case of writer’s block, he hits the road for a press tour with girlfriend Kathy (Joanna Brewster), artist Aurora (Niamh Wilson) and buddy/publisher, Ezra (Baruchel). He meets zealous fans and does interviews, where he’s sometimes chastised for capitalizing on tragedy.

Meanwhile, a series of brutal murders start occurring, identical to those appearing in his comics and, despite the film's title, not really random at all. The killer taunts Todd with cryptic phone messages giving clues to the next murder. Somewhat miraculously, he also seems to know when and where to commit these crimes so Todd can stumble across his handiwork. How the killer knows in-advance which roads they’ll be traveling is a question I guess we ain’t supposed to ask. And it’s amazing how often the exact types of victims he requires to replicate these comic book deaths just happen to be on those same roads...right when he needs them.

But hey...plausibility has never been a prerequisite for good horror. Unfortunately, Random Acts of Violence doesn’t qualify. It takes its premise way too seriously, to the point where it feels like we’re being preached on the dangers of media violence (ironic, considering how sadistic and gory this is). The tone is consistently brooding, as is the self-absorbed main character, Todd, who seems to spend most of the time bemoaning his predicament (and Williams pretty much plays him with a single expression of bewilderment).

Even all that would be okay if the story held any surprises, but we’ve seen it all before and pulled-off with more panache than Baruchel and his cast are able to muster. Aside from some decent practical make-up effects, there’s little to recommend Random Acts of Violence. Humorless, predictable and ultimately depressing, the film is competently assembled, but more like a Misguided Act of Tedium.

FEATURETTES - “More Than Just a Scary Movie”; “Inside the Making of an Action Scene”