LOVE, WEDDINGS & OTHER DISASTERS: A Fistful of Dugan 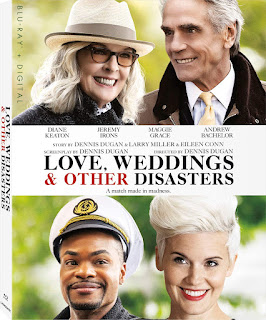 Somewhat ominously, writer-director Dennis Dugan’s name is all over the front cover, as prominently as his marquee cast. If this would-be auteur doesn’t ring a bell, Dugan is best known for directing a lot of Adam Sandler’s worst comedies, as well as the most obnoxious ”family” film of all time, Problem Child.

But hey, even Michael Bay and Paul W.S. Anderson managed to knock it out of the park on occasion. And with a cast that includes Jeremy Irons and Diane Keaton, how bad could it possibly be?

Love, Weddings and Other Disasters answers that rhetorical question as though it were a challenge. Meandering, narratively rudderless and staggeringly unfunny, this is a sprawling mess of a movie that not-only wastes a pretty decent cast, it doesn’t have the attention span to focus on any single character more than five minutes at a time. But that’s okay, because they’re so vapidly-written that we never feel like we’re watching real people, anyway.

The ‘plot’ consists of several concurrent stories of various characters in and around Boston, some looking for love, others who don’t think they’re looking for love. The storylines occasionally intersect, but all of them culminate in a massive wedding during the final act. In the meantime, the narrative shifts from story to story, revisiting each one with the frequency of an old Love Boat episode. The pacing and tone are all over the place. One minute it’s as juvenile as a Sandler film, the next it’s as maudlin as a Hallmark card, with little or no transition. It’s almost like Dugan shot four or five different shorts, then haphazardly cobbled them together for a feature-length film.

You can’t blame the cast, who are doing their best with what they’ve been given, which ain’t much. Perhaps Dugan was counting on their talent to mask his utter inability to write convincing characters or amusing dialogue. The only truly terrible performance comes courtesy of the director himself, playing the obnoxious host of a dating game show. Like Sandler at his worst, he comes across as his own biggest fan, but only manages to instill the viewer with second hand embarrassment. The entire scene is like a lame Saturday Night Live sketch that goes on way too long.

Dugan does deserve props for one thing...he managed to attract a pretty decent cast. I’m not sure how he pulled it off, because Love, Weddings & Other Disasters is...well, a disaster. It’s an interminable, laugh-free endurance test with artificial characters, erratic pacing and moments of shallow sentimentality. The most prominent name in the credits gets most of the blame.