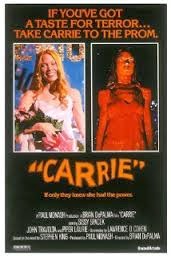 My youngest daughter Lucy (who’s 9) and I were recently watching TV when a commercial touting the remake of Carrie popped-up. As a horror purist, I sorta rolled my eyes and thought, really?

But Lucy chirped, “I wanna see that!”

In recent years, Lucy has turned into my little horror buddy. She likes scary movies and we’ve spent many Friday nights on the sofa watching them together, much to the chagrin of my wife. I always try to find films in my collection I think she can handle, which is actually quite a few, since she’s a tough little bird. She’s not ready for The Exorcist, The Fly or any ‘torture-porn’ film, but she loves stuff like the Final Destination series, Poltergeist, Jaws, Insidious and a slew of zombie flicks. Sure, I fuck up sometimes, like when The Mist totally freaked her out and I had to shut it off half-way through (before it got reeeeaaally disturbing at the end), but for the most part, she’s open to lots of stuff, old and new.

So when I told Lucy I had the original Carrie on DVD, she was more than game. I actually kind-of wanted to revisit the film myself, since it’d been at least three decades since I last watched it (I found the thing in a Wal-Mart budget bin a few years ago, but never got around to removing the cellophane from the box). As much as I could recollect, Carrie would probably be okay for my daughter…an older movie, not too gory and not too scary, save for the final scene in which Carrie’s hand shoots out of the grave (one of the greatest jump-scares of all time, as far as I’m concerned). I was certain that scene would get her.

But time does weird things to movies. You forget stuff, especially those you haven’t watched in years. You know how the people you encounter on a regular basis always look the same, even over the course of years, yet when you go to a 20 year class reunion, almost none of your old friends look like you remember them (in fact, you don’t even know who some of them are without a nametag)? That’s what revisiting Carrie was like. Many of my all-time favorite films hail from the same era (the 70s), yet I’ve frequently revisited them over the years and never noticed how dated most of them have become. But Carrie, although a decent enough movie, was never one of my favorites. Aside from that climactic grave scene (which made us practically piss ourselves back them), my overall memory of the film had dimmed over the years.

So as I sat down with Lucy to watch the original Carrie one Friday evening, we both made some acute observations.

We’ll start with mine:


As for the final jump-scare, when Carrie’s hand shoots out of the grave, Lucy didn't react at all. When I informed her that scene scared the crap out of everyone back then, she simply shrugged and said, “Why?”

God, I’ve created a monster. She is so-used to jump-scares that one of the greatest of all time doesn’t even phase her. I guess I can relate; even though the car chase in Bullitt is widely considered one of the greatest of all time, as someone who grew up on The Road Warrior and Raiders of the Lost Ark, I never thought Bullitt was anything special when I first saw it.

Lucy and I checked out the disc’s bonus features afterwards, which we often do. We watched a retrospective documentary, and she was mostly blown-away by how most of these actors have aged since then. Of course she was…Lucy has no concept of 1976 versus 2013. Why would she?

But for me, not only did the movie look and feel phenomenally dated, but the actors suddenly grew older without my permission….less hair, more pounds, etc. Sure, Nancy Allen still looked good, like a middle-aged hot mom. But with the exception of Spacek & Travolta, who’ve been consistent public figures since then, the rest have aged just as badly as the movie, simply because of their overall absence from public consciousness.

On the plus side, Lucy liked Carrie, even if she didn’t find it particularly scary. That’s something…the fact she empathized with Carrie, identified with the protagonists and truly despised its villains. Despite the big hair, over-aged teenagers, lack of ‘modern-day’ horror conventions and the voyeuristic opening, Lucy was able to appreciate the movie as a dark tragedy.

I dunno, maybe Carrie hasn’t aged as badly as I thought.
Posted by D.M. Anderson at 8:37 PM