ESCAPE FROM L.A. vs. the Atlanta Falcons 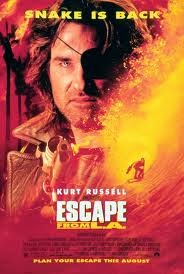 Growing up, Mom and Dad were die hard 49ers fans. This was during the early 70s, a decade dominated by the Cowboys, Steelers and Raiders. The Niners had good years and bad years, but my parents (especially Dad) stayed loyal to their team no matter what.

True fans, my parents were.

I wanted to be true fan, too. In what might be considered my first true act of rebellion, I decided my favorite team would be the Atlanta Falcons, partially because they were in the same division as the Niners, but mainly because their helmets were cool. Not knowing a hell of a lot about the NFL (I seldom actually sat and watched a game…hey, I was 9), I chose a shitty team that wouldn’t win a division title until 1980, wouldn’t make it to the Super Bowl until 1998 and seldom put together back-to-back winning seasons throughout their entire history.

But, by God, I stuck with them, even after I grew older and actually began paying attention. Like my folks, I eventually became a true fan of the Falcons, hanging with them through thick and thin. I had my favorite players on their rosters over the years…Andre Rison, Jamal Anderson, Michael Vick (before he became a dog murderer), Jesse Tuggle, Tony Gonzalez, Julio Jones, etc.

But unlike my folks, whose beloved Niners won four Super Bowls during the 80s, I’m still waiting to be rewarded for my decades-long loyalty, a four-to-five year run where my ol’ Falcons are among the NFL elite. They’ve had great years here and there, but just couldn't keep it together for very long…

…kinda like John Carpenter, the first director who, as a movie fan, I began paying attention to.

Unlike the Falcons (which became a franchise in 1966 and struggled for over 15 years), Carpenter, after a few respected cult flicks, blasted right out of the gate with Halloween, the first film to introduce me (and millions of others) to the unbridled thrill of the jump-scare. He quickly followed that up with The Fog, which was just as atmospheric, but not all that scary and a bit of a let-down, like when the Falcons followed-up their first division title in 1980 with a second place finish the next year. But I really jumped on the Carpenter bandwagon after seeing Escape from New York. At the time, it was the coolest thing I’d ever seen on the big screen…the look, the nihilism, the action, the music, the character and image of Snake Plissken. Escape from New York was when I truly became a John Carpenter fan.

He also delivered the goods the next year with his remake of The Thing (which I now consider to be the crowning achievement of his career). Two years, two perfect films. As a die hard disciple who now worshipped at the alter of Carpenter, I couldn’t wait for the man’s next move.

Unfortunately, his next moves were Christine, Starman, Big Trouble in Little China, Prince of Darkness, They Live, Memoirs of an Invisible Man and In the Mouth of Madness. Some of them were pretty good, some underrated and some godawful. Still, I went to see them all because Carpenter’s name was above the titles. But, like being an Atlanta Falcons fan, I was disappointed just as often as I was pleased. There were even a few occasions where I found myself defending some of these films simply because my favorite director was responsible (such as Memoirs & Big Trouble, which are actually kinda shitty).

But I never gave up on the man. Surely he had another great film in him…maybe even his greatest film, after he announced he’d be helming Escape from L.A., a belated, big-budget sequel to one of his all-time cult classics. For me, this was huge; Snake Plissken, my favorite anti-hero, was coming back to the big screen. Keeping tabs on its production through the internet and movie magazines, this was as exciting as when the Atlanta Falcons kept winning and, despite Vegas odds makers, landed themselves in the Super Bowl in 1998.

But my beloved Falcons got slaughtered by the Denver Broncos in the Super Bowl, prompting some to believe the Minnesota Vikings (the team Atlanta beat in overtime during the NFC championship) would have been a more formidable opponent. Even though Denver was already heavily favored to win, I was still a bit heartbroken, though not-at-all surprised. After the game, because of Atlanta’s inconsistent history, I wondered how long it would be before they got another shot at the Lombardi Trophy.

Similarly, when I took my wife to see Escape from L.A. on opening night, even though I went in thinking it was John Carpenter’s chance to return to the directorial greatness of his early-80s heyday, I wasn’t really surprised that the film ended up being an unimaginative retread of the original, loaded with phony CGI and campy self-parody (Oh, God, Snake surfing down Wilshire Boulevard?). Still, even though it’s an amusing send-up of Escape from New York, I have to admit Carpenter essentially shit all over the legacy of one of his most beloved films (but Russell, reprising his role as Plissken, is still fun as hell). Like the Falcons, Carpenter once-again dropped the ball.

I still root for them both, though. Carpenter hasn’t made a decent movie in nearly two decades (nor a great one in over 30 years), and maybe he simply lost his mojo. The Falcons sometimes make the playoffs, sometimes they don’t, and I wonder if they’ll ever actually make it to the Super Bowl again in my lifetime, much less win it.

But I remain a die hard fan because I’m loyal, and true fans stick around through good times and bad. Mom and Dad taught me that.
Posted by D.M. Anderson at 9:45 PM