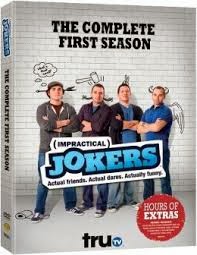 A few superficial comparisons can be drawn between Impractical Jokers and Jackass, since both shows feature packs of self-congratulating buddies daring each other to do idiotic things on camera, much of the humor deriving from the reactions of the unsuspecting public around them. But really, the similarities end there. Jackass consists mostly of stunts designed to shock or gross us out, or at-least have us wincing at the pain the cast inflicts on themselves and each other. While I must admit the show has always been a bit of a guilty pleasure, it isn’t what anyone would call clever. Every episode is simply a random collection of dumb gags.

Impractical Jokers, which airs on TruTV, is actually more like Alan Funt’s old Candid Camera series, with a slight game show twist. Each episode is a competition among its four cast members (from an improvisational comedy group, The Tenderloins), where they are forced to do something potentially awkward or humiliating in a public place (malls, drug stores, restaurants, public parks, etc.). All four must take turns doing this, each equipped with an earpiece and must say and do whatever the other three guys tell him (though whoever is on the spot does have the option of refusing, like when what the suggestion is too embarrassing, crude or mean-spirited). Whoever is least successful is the loser of that round. At the end of the show, the biggest loser of the episode must do something in public which would make just about anyone watching shudder in second-hand embarrassment.

Though Impractical Jokers does contain its fair share of adult humor, none of the gags are overtly gross, vulgar or cruel. Since these guys often refuse to cross the line when their buddies tell them to, it makes all of them kinda likeable. The show is often laugh-out-loud funny, sometimes because of their willingness (or refusal) to say or do certain things, sometimes because of the reactions from the public.

However, at 17 episodes, a little of this stuff goes a long way. After awhile, a sameness permeates each episode - another mall gag, another restaurant gag, another drug store gag - to the point where, unless you simply can’t get enough of these guys’ banter, you’ll wish they’d find a different place to visit. There isn’t the same variety of gags featured in something like Jackass.

SPECIAL FEATURES: Deleted scenes; Behind the scenes; Meet the Stars of IMPRACTICAL JOKERS; Commentary for 5 episodes.