Disc Review: THE MESSAGE (Blu-Ray) and LION OF THE DESERT (Blu-Ray) 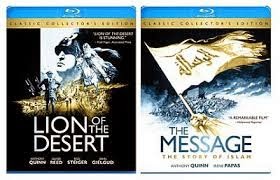 Horror fans might recognize the name of Moustapha Akkad (RIP), the executive producer of the Halloween franchise. Though those films were obviously his bread and butter, Akkad was also (very briefly) a fairly talented director in his own right, cranking out a couple of old school historical epics during a time no one else was making them. The Message and Lion of the Desert would have been right at home among the three-hour extravaganzas Hollywood was pumping out in the 50s and 60s. Instead, both fell into relative obscurity.

It makes sense that Anchor Bay is releasing both films on Blu-Ray at the same time, since they are similar in style, feature much of the same cast & crew, and depict key moments in Islamic history.

I actually remember The Message when it was released in the late 70s as Mohammad, Messenger of God, about the rise of the Islamic faith (its history near and dear to Akkad) during the 7th Century. While it’ll never make anyone forget The Ten Commandments or Lawrence of Arabia, the are moments when you can’t help but be impressed by the cinematography. But at three hours, it’s way too long. It’s an interesting story, sparked by a few impressive battle sequences, but sitting through the entire film is just as exhausting today as it was when I was a kid (I sneaked into it at the four-plex near my house because I'd seen everything else).

Another major problem is the film’s refusal to let the audience see or hear Mohammad himself, a directorial decision apparently made in accordance of Muslim beliefs. I respect that, but having actors repeatedly stop and address the camera directly, as though speaking to Mohammad, is a terrible idea. Breaking the fourth wall really only works in comedies (and no one did it better than Mel Brooks). Here, it just sucks you right out of the story. The Message also suffers from a complete lack of characterization. The impressive cast does what they can with what they’ve got (especially Anthony Quinn & Michael Ansara), but Akkad seems content to simply show us what they do, not who they were.

Akkad’s follow-up, Lion of the Desert, takes place in 1929 and recounts Italy’s decades-long attempt to conquer Libya. Sick of being continually defeated by rag-tag Libyan rebels, led by Omar Mukhtar (Quinn again), Mussolini (Rod Steiger) appoints General Graziani (Oliver Reed, who’s terrific) to hunt Mukhtar down and defeat the rebels. Even though Graziani has far more troops, weapons and tanks at his disposal, this turns out to be easier said than done.

Like The Message, there’s little real character development, but Lion of the Desert is livelier and far more action-oriented (not to mention a lot more violent), which makes up for the fact we know nothing about any of these folks outside a historical context. We’re repeatedly thrown into the middle of battle after battle, with obligatory exposition in between, all of which is well-executed and entertaining enough to justify its equally-long running time. And if a little deju vu creeps in while your watching, perhaps it’s because the plot is nearly identical to Braveheart. Since it predates Braveheart by 14 years and appears to be more historically accurate, one can’t help but wonder about the influence it may have had on Mel Gibson’s highly-romanticized epic (though Braveheart is still a far better film).

The Message is one of those movies one tends to admire more than enjoy (like Gandhi). Sure, it looks great and treats its subject matter with an extreme amount of respect, but that doesn’t mean it’s worth revisiting over and over. From a pure entertainment standpoint, Lion of the Desert is the undiscovered gem of the two, which remembers it’s supposed to be a movie first, history lesson second. It’s no classic, but worth checking out for fans of historical epics.

LION OF THE DESERT