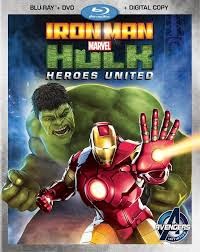 Maybe the problem is with me, but I kind-of expected this to be better. Maybe I thought, since Marvel Studios is more-or-less the Pixar of superhero movies, that even a direct-to-video animated quickie like this would be undemanding fun, sparked by a bit of the wit and character detail that makes their blockbusters so amusing.

While Heroes United isn’t terrible, it is pretty bland, despite consisting of nearly wall-to-wall action. It’s essentially one prolonged battle, pitting Iron Man & Hulk against Zzzax, an energy-born monster who becomes stronger with every power source it comes in contact with. The story only slows down long enough to allow our heroes to get-in a few wisecracks from time to time.

Maybe part of my problem is I’ve grown accustomed to these characters as depicted in the theatrical films. There are fleeting attempts to present Stark as the amusing, sarcastic rogue we’ve grown to love (but here, voiced by a guy who sounds like he‘s still in high school). But I hated how Hulk is depicted. Here, he’s Hulk the entire time, even when he isn’t angry, and hearing him engage in coherent dialogue (including wisecracks) during the film flies against what Marvel has done thus far to establish him as a barely-uncontrollable wrecking crew.

I also had a problem with how Stark, Hulk and Zzzax continually narrate their every move (even if no one else is around), much like the superhero cartoons I grew up with in the 1970s. In fact, the entire movie plays a lot those old shows, aimed for the kiddie crowd who are apparently too stupid to follow the plot unless it is continually explained to them. This would be generic Saturday morning fodder thirty years ago if not for the CG animation.

Speaking of which, the CG is the biggest thing working against it. All the characters are blandly rendered, drained of any of real expression. We’ve all seen CG animation done better, even for television. I personally think this film would have been more fun if done in the limited style which has worked for DC shows all these years.

But maybe my biggest problem is my age. Watching this, I can see how a seven or eight year old kid would enjoy it…the film’s loaded with flash & action. Parents may roll their eyes at the lame attempts at humor, but kids will chuckle here and there, especially at racy comments like ‘balls for brains’.

And I guess, since this is obviously aimed at children, my comments are redundant. Still, it’s kind-of a shame, being that Marvel’s blockbusters try to appeal to everyone, and there’s no reason their less ambitious projects couldn’t try to do the same.