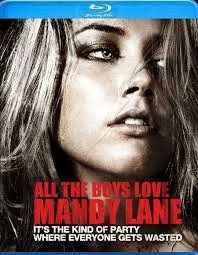 Kind of an interesting story behind this one…

It was actually completed in 2006, but several distribution issues kept it from being released in America for over seven years. In the meantime, star Amber Heard has become a minor sex symbol and director Jonathan Levine began making a name for himself with films like 50/50 and Warm Bodies. But unlike Levine’s subsequent crowd pleasers, All the Boys Love Mandy Lane is a dark, violent slasher film similar in look and tone to the original Texas Chainsaw Massacre.

Heard plays the title character, a shy-yet-popular high school girl who turns everyone’s heads; all the boys do indeed seem to love Mandy Lane. In fact, one guy really really loves her, and proceeds to torture and kill everyone around her during a weekend party at a cattle ranch. One-by-one, secondary characters meet violent ends. But unlike typical slasher fare, we’re made aware early on who’s behind it all: Emmet, her former best friend, and a social outcast ever since he coaxed a bullying classmate into jumping from his roof into a pool, getting killed in the process.

Though loaded with many of the usual slasher tropes - hunky douche bags, nubile hotties, bad behavior preceding violent death, token black guy as an early victim - this ain’t a modern horror movie aimed at the mallrat crowd. In fact, it isn’t really a horror movie at all, even though great care has been taken to make it look like it oozed from an era when films like The Texas Chainsaw Massacre dominated drive-in screens. It is, however, a brutal revenge film with a climactic twist I wouldn’t dream of giving away (which I admit I didn’t see coming, but after a bit of reflection, makes total sense).

As an homage to the sleazy spectacles of yesteryear, it’s obvious Levine has done his homework. He also does a great job establishing each and every character in early scenes. I guess the biggest problem is that, with the exception of Mandy and local ranch-hand Garth, none of these characters are even remotely likeable. We can accurately predict who’s gonna die, and don’t feel much when they finally do.

But that great twist ending goes a long way toward making us forgive the film’s clichés and shortcomings (perhaps even convincing us it’s a much smarter movie than we initially assumed). Is All the Boys Love Mandy Lane a great film? No, but it is a dark, well-directed homage to another era. With hindsight, it isn’t surprising that Jonathan Levine has gone on to bigger and better things.