SATURN 3 and The General’s Lament 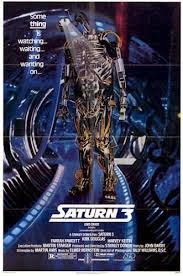 I had a friend in school named Tony, who did most of his thinking with his pecker, even before he learned how to use it (with anyone other than himself, that is). The only things that ever seemed to be on his mind were girls and sex. He wasn’t very discreet about it either. When girls in our class weren’t looking, he’d stick his tongue between two fingers and wiggle it at them. He had an endless cache of the filthiest jokes I ever heard, and knew more synonyms for female body parts than there are stars in the heavens. And, like a lot of guys who viewed themselves as sexual studs, he gave his dick a nickname: The General. I gotta admit, it was always pretty damn funny when some sweety passed by in the halls or at the mall and Tony would snicker, “Well, she just earned a salute from The General.”

Then there were the famous females of that era who earned similar salutes from The General - Linda Carter, Loni Anderson, the Dallas Cowboys Cheerleaders, Olivia Newton John - and many of their posters adorned his bedroom walls. But he carried a special torch for Farrah Fawcett. He had a lot of her pin-ups, including her most iconic, posing in that red, one-piece bathing suit, her high-beams threatening to poke an eye out. That one had a place of honor on his wall, right over his desk.

It goes without saying that Tony never missed an episode of Charlie’s Angels.

When Farrah Fawcett graced the cover of Playboy in 1978, I imagine that, for Tony, the clouds parted and the heavens sang. His dad even bought him a copy of that issue, briefly making me think Tony had the coolest parent to ever walk the Earth. Anyway, although Farrah did look mighty fine on the cover of the magazine, Tony was pretty deflated when it turned out she didn’t actually appear nude in any of its pages.

Fast forward a few years, during which time new hotties began to grace our bedroom walls (I worshipped at the alter of Deborah Harry, while Tony found room for Catherine Bach sporting her Daisy Dukes) and Farrah had quit Charlie’s Angels to pursue a movie career. She’d done a couple of movies nobody cared about, but Tony’s infatuation with her was rekindled with the release of Saturn 3 in 1980 because he heard that this was the movie where she finally gets naked.

The film came and went in theaters in the blink of an eye and turned up on HBO about a year later (premiering at midnight). At that time, almost no one had cable TV, and HBO was a luxury afforded to those willing to pay for a dildo-shaped antenna on their roof, which my parents did. Me and Tony were both around 15 or 16 at the time, well past the age most kids did sleepovers, but he was one of my long-time best friends, so when he invited himself to spend the night so he could check out Saturn 3, I had no real problem with it. And, to be honest, even though Farrah was never my favorite Angel (I was always partial to Kate Jackson), seeing her au naturale piqued my curiosity.

Saturn 3 is 88 idiotic minutes of movie mega-cheese, piggybacking on the success of by Star Wars & Alien. In this one, Fawcett plays Alex, a young, naïve researcher who lives at a space station on Saturn’s third moon with her colleague/lover, Adam (Kirk Douglas, who’s thirty years older!). Their existence is idyllic…alone together, solving Earth’s ills by day, rolling in the sheets by night, with no one else around to inform them that their relationship is really fucking creepy. Enter Benson (Harvey Keitel), an unstable sort who shows up with his uber-robot, Hector, to try and make the place more productive. Benson’s not welcome here, especially after he develops the hots for Alex (Who can blame him? Certainly not Tony). But Hector is not your usual robot; he functions on living brain tissue, that brain being Benson’s, who’s an obvious pervert and psychopath. This means Hector is also horny and homicidal, but since Benson didn't see fit to equip Hector with a little General of his own, the poor, frustrated machine has to settle for being merely homicidal.

Saturn 3 isn’t a very good movie, but it had the chance to be at one time. It was produced by ITC Entertainment, which had also released the budget-busting flop, Raise the Titanic. That film's cost resulted in Saturn 3's budget being severely slashed, and it shows. There were also a few somewhat infamous scenes deleted from the final cut, the goofiest being Kirk and Farrah tripping on ecstasy, and Farrah struts into the room wearing the mother of all galactic S&M outfits. The whole scene looks like something lifted out of Barbarella and was still used in promotional trailers.

Still, it's sort-of fun if you keep your expectations low. I had no expectations at the time, but Tony certainly did, meaning he was yet-again disappointed. Sure, we caught a bit of boobage, but saw a lot more of Kirk Douglas’s sagging old butt than Farrah’s titillating treasures. Lying on the family room floor in our sleeping bags, I remember Tony pounding his pillow after the movie was over, complaining that “we didn’t see any snatch!”

I wasn’t too concerned about how short-changed Tony felt, mainly because it was two-in-the-morning and I was tired, but also because there was something about the Benson character that bothered me…he looked suitably evil, but sounded funny. It wasn’t until a few years later that I discovered Harvey Keitel actually had a thick Brooklyn accent and his lines in Saturn 3 were dubbed by Ray Dotrice.

Fast forward several more years, and although I haven’t talk to him in decades, I’m sure Tony had since-been able to finally sate his Farrah fix with later Playboy issues, when she truly did get naked. As for me, Saturn 3 is another one of those films I watched as a kid that isn’t very good, but have a nostalgic attachment to. It’s also a bit sad that Kirk Douglas was older when he made Saturn 3 than Farrah was when she died.
Posted by D.M. Anderson at 6:25 PM