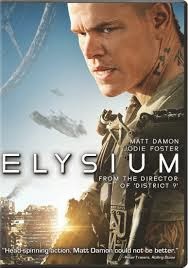 Neil Blomkamp’s District 9 was a terrific surprise that kind-of came out of nowhere…intelligent, satiric & gritty adult sci-fi with a timely theme, something we don’t get a lot of these days. For his next film, I wondered if Blomkamp, this time armed with bankable stars and a huge budget, would simply grab the brass ring and pump out another brainless summer spectacle, or continue in the same vein as his groundbreaking feature debut. Fortunately, Elysium, while not quite as fresh as District 9, is a worthy follow-up. It is similar in look, theme & tone, and easily the smartest sci-fi action picture released during a year rife with them.

This one takes place roughly a century in the future, and Earth is an overpopulated, disease-ridden cesspool. The wealthy have since left the planet to live on Elysium, an massive Utopian space station guarded by zealous elitist Delacourt (Jodie Foster), who goes to extremes to keep common folks Earthbound. Matt Damon plays Max, an ex-con now trying to make-do as a factory worker in Los Angeles (which looks a lot like the alien shantytown in District 9).

After being exposed to a lethal dose of radiation on the job, Max has only five days to live unless he can get to Elysium, where every home is equipped with a Med-Bay, which can cure any injury or disease within minutes. The problem is most people who try to illegally immigrate there are either deported back to Earth or shot out of the sky upon approach. Desperate, Max seeks out his old crime boss. In return for a shuttle ticket, he agrees to track down and steal computer info (which can potentially wipe-out the existing files kept on everyone) from one of the Elysium elite who runs the factory he worked at. To do this, Max is surgically altered with a sort-of exoskeleton which increases his strength and allows him to download the files right into his own head. But things don't go quite as planned; Max is able to download the files, but they are encripted, so accessing them will kill him. Meanwhile, Delacourt needs those files too (in order to attempt a coup for total control of Elysium), so she enlists psychotic mercenary Kruger (Sharlto Copley, in a scenery-chewing performance) to bring Max in alive.

This is intriguing, suspenseful stuff, even after a gratuitous love-interest is thrown into the mix (Frey, played by Alice Braga, who has a daughter dying of leukemia, rendering the outcome somewhat predictable). While Elysium delivers its socio-political message with the subtlety of a mallet, it's a smart story punctuated by violent action, spectacular special effects (which seldom call attention to themselves) and mostly-interesting characters. I say mostly because the main antagonist, Delacourt, is fairly one-dimensional (we know she's a cold-hearted bitch before she even opens her mouth). Foster is usually one of the best parts of any movie, but here, her bizarre accent is unnecessarily distracting (and exactly where the hell is she supposed to be from, anyway?). However, as Max, Damon does a great job giving us a main-character whose both heroic and vulnerable, not-to-mention a bit morally ambiguous.

Despite its minor flaws, Elysium is also similar to District 9 in the sense it's a film that will stick around in your mind a lot longer than the usual sci-fi shoot-em-up. It's premise, action and emotionally-satisfying story are worth visiting more than once, making this disc a must-own for fans of intelligent, grown-up sci-fi.

EXTRAS:
ENGINEERING UTOPIA: Creating a Society in the Sky
COLLABORATION: Creating the Performances in Elysium