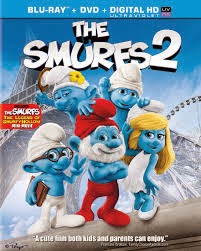 I had my youngest daughter, Lucy (9), help me review this because I’ve never been what you’d call a Smurfs fan. The first film, which I still haven’t watched, looked about appealing as Cocoa Puffs & Ketchup, and this sequel (which I had no idea anyone really wanted) didn’t look any better. It still sticks in my craw that a lame 80’s Saturday morning crapfest has its own movie franchise (The Smurfs 3 is on its way), yet no one will give the Looney Tunes another shot at big screen glory.

But I know I’m not its target audience, hence my insistence that Lucy sit on the sofa to endure The Smurfs 2 along with me. As someone who isn’t familiar with the Belgian comic books or the TV show, she had no inherent bias, so who better to view it objectively? Still, she was a little reluctant because, A) she never expressed any previous interest in either Smurf movie, and B) Good Luck Charlie was on. When I told her it was either The Smurfs 2 or the Broncos vs. the Chiefs on our big screen TV (which everyone in the family fights for control of), Lucy gave in.

In The Smurfs 2, Gargamel (Hank Azario) is now a famous magician in Paris, using previously-ill-gotten Smurf juice to create his illusions. But he’s running low and plans to kidnap Smurfette (Katy Perry), who knows the formula. After she’s taken, Papa and a few other Smurfs, along with human assistance from Patrick (Neil Patrick Harris), wife Grace (Jayma Mays) & estranged step-dad Victor (Brendan Gleeson), set out to rescue her. A few new marketing opportunities characters are added to the mix, Vexy & Hackus, two Naughties created by Gargamel.

What follows are the good, the bad and the ugly of The Smurfs 2, as reviewed by Lucy and myself:

The Good:
The Bad:
The Ugly:
After the movie was over, I gave Lucy control of the TV. By bizarre coincidence, she found the first Smurfs movie playing on Cartoon Network. As a born-again fan, she was ecstatic. I, however, was not among the converted. Other than those who carry a nostalgic torch for these innocuous blue critters, I’m assuming few other parents will be either.