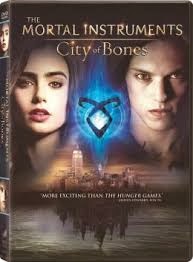 My oldest daughter bakes great cookies, the best I ever tasted. I’m not sure how she does it. I’ve tried baking cookies using the same ingredients, but mine don’t turn out as good. Similarly, The Mortal Instruments: City of Bones, yet-another attempt at a franchise based on a series of popular young adult fantasy novels, strives to be another Harry Potter or Twilight (and obviously inspired by both). It has most of the same ingredients, but like my cookies, a checklist of ingredients is no guarantee that the end result will be the same. City of Bones is very similar to how my own cookies taste…not terrible, but nothing special either.

It’s almost as if the filmmakers obsessively studied other YA franchise cookbooks to create a checklist for their own movie: Attractive emo chick…check. Smoldering emo boy…check. Ongoing love triangle…check. Costumes which are likely available at Hot Topic…check. Ominous signs & symbols foretelling dark times ahead unless we can stop it…check. Werewolves & vampires…check. A magical world which exists right under our noses…check. Hyperkinetic fight scenes…check. Spectacular CGI that would have knocked our socks off 10 years ago…check. A resolution which blatantly leaves the door open for the next installment…check.

All these tropes and more are thrown into a mixing bowl, along with an overly-convoluted plot in which our heroine, Clary (Lily Collins), learns she’s more than your average teen. She’s a Shadowhunter - half-human, half-angel - placed on Earth to protect the world from demons (with a bit of help from some local New York werewolves). It’s a decent enough concept, if a bit unoriginal. But originality isn’t a necessary ingredient if the characters are interesting. However, we’re given no real reason to give a damn about them. Sure, everyone is pretty and dresses cool (I can imagine Collins and Bower making undemanding tween hearts flutter), but it’s all window dressing. Say what you will about the Twilight films…as goofy as they are, the characters are pretty well-rounded.

So we end up with a movie with a bloated running time which plays like a greatest hits collection of scenes from other YA franchises (with a little bit of Evil Dead tossed in), and is ultimately forgettable because it offers nothing new. Like my daughter’s cookies versus my own, it isn’t terrible, but nothing special compared to what came before.