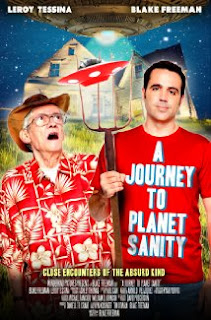 There are two things which have diminished the power of the documentary today. The first is Michael Moore. The man is a terrific filmmaker. His films are eye-opening and entertaining, but also deliberately one-sided and polarizing. His in-your-face, ambush-your-opponent style rallies his believers and infuriates his detractors. There’s no middle ground, which means his films are not documentaries in the purest sense. The second is the boon of reality TV, where its so-called subjects are obviously playing up to the camera, most of whom are well-aware that the more outrageously they behave, the further they can extend their 15 minutes of fame.

Because of this, one tends to take a cynical approach anything passing itself off as a documentary. We ask ourselves how much of what we’re watching is staged or scripted, whether or not it simply exists for us to laugh at the stupidity of others. There have been a lot of such movies in recent years, the best being The King of Kong: A Fistful of Quarters, which manages to tread the fine line between ridicule and empathy for its subjects.

Blake Freeman’s film, A Journey to Planet Sanity, tries for a similar vibe, but with diminished results, mainly because our overall cynicism forces us to question how much of what we’re watching is genuine.

Freeman is the director and de-facto star of the film. He meets a gullible old rube (LeRoy Tessina), who’s spend countless amounts of money over the years on phony psychics and alien-abduction devices. Then the two go on a road trip of Southern California as Freeman accosts these folks with obvious, for-the-camera sarcasm. After meeting each of these people (including one who claims to be able to foretell one’s future by examining their feces), Freeman’s comments are often very funny. But cynically, I found myself wondering how much of it was staged.

The film takes a darker turn in the final third, when we’re made aware that Tessina’s obsessions threaten to totally disrupt his life, since he can no longer afford his mortgage  payments. After learning Tessina has a rudimentary talent for painting, Freeman suggests throwing together dozens of sloppily-thrown-together pieces of so-called abstract art and displaying them in a gallery, where pretentious hipsters will shell-out thousands for them.

This is where I began to call bullshit of the film, where it suddenly switches from being an amusing look at phony psychics, then tries to shove in some drama with Freeman’s noble efforts to save Tessina’s house, while poking fun at an entirely different culture. I’m sorry, I find it hard to believe that, no matter how pretentious these so-called art aficionados are, that they’d be so easily duped by paintings slathered together in ten minutes.

I dunno, maybe I’m wrong. Maybe the film depicts things exactly as they went down, and I’m simply too jaded by decades of Michael Moore manipulation and reality TV rhetoric to be able to accept it at face value.

But even if it’s all bullshit, is the film entertaining? Yeah, sort of. Freeman’s a truly funny guy, and his commentary is often quite amusing. Tessina is definitely a likeable sort (we surely do not want him to be as gullible as he appears in the film). I think it’ll help if you approach a movie like this with a totally open mind and far-less cynicism than I was able to.

A Journey to Planet Sanity premieres in theaters 12/6/2013