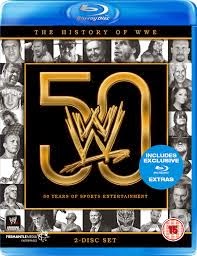 I’ve never been a fan of pro wrestling, especially after it escaped its humble regional origins to become a pop culture phenomenon, and evolved into more of a sleazy soap opera than anything resembling a sport. When you look at footage from the WWE’s 80s & 90s heyday (of which this disc has plenty), one might even be tempted to believe the roots of reality TV lie here, with flashy, trash-talking personalities fighting each other, more for attention than a title belt.

But even if you think the entire concept is phenomenally stupid, you have to admit it took a lot of creative genius to make the WWE one of the most recognizable brand names in entertainment. And that’s ultimately the coolest thing about this 2-disc set…one doesn’t necessarily need to be a fan to develop an appreciation how masterfully the WWE insinuated itself on our culture.

Although The History of WWE is more-than-a-bit self-congratulatory, we get an interesting look at pro wrestling as a true business, how it’s been marketed and its impact on television and the media. The film quickly-skims over WWE’s first twenty years to mostly focus on its explosive popularity in the 80s, which is kind-of a shame, since I think a great two-hour documentary could be made from its grassroots origins alone. Still, there are a slew of entertaining interviews, featuring nearly every WWE personality who had an impact over the past 50 years. Some are more candid than others (particularly during the steroid-use controversy), but most have nothing but gushing praise for the man who’s widely credited for moving wrestling from abandoned hockey rinks into stadiums & cable TV: Vince McMahon.

In the real world, McMahon is a polarizing figure, controversially ruling over an empire, narcissistic enough to insert himself as a major character in the WWE (particularly during the so-called ‘Attitude Era’), and as flamboyant as the athletes working for him. This film kinda sugarcoats the negative aspects of his career, but one cannot deny his marketing savvy. If nothing else, he is a genius businessman, the Walt Disney of trash TV. Somewhat frustratingly, however, McMahon is the one guy who does not take-part in this film. Though his family contributes interviews, Vince himself is only present in archival footage, which is ironic when you consider this film is produced and distributed by his own company.

While The History of WWE mostly preaches to the converted, its look into the marketing and promotion of itself is interesting for non-fans like me, who may not be coerced into tuning into WWE Smackdown every week, but are fascinated its ongoing appeal and what makes it tick.

SPECIAL FEATURES: Disc 1 also includes several segments left out of the final cut of the film, along with a few matches from past Wrestlemania broadcasts. Disc 2 consists primarily of classic wrestling matches, most of them from the past three decades. Longtime fans of the WWE might appreciate them, but those who aren’t among the converted aren’t likely to care at all.