BEAUTY AND THE BEAST (1991): An Unfortunate Metaphor 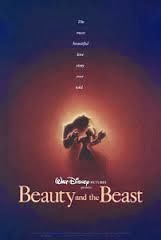 A few words about gay people…

I grew up in the less-politically-correct 70s & 80s, when gay men were mostly depicted in the media as flamboyant perverts, objects of mirth and ridicule because of their overall gayness. This was back when we assumed all gays were hairdressers, loved Liza Minnelli and regularly attended midnight screenings of The Rocky Horror Picture Show, where they could frolic in drag with their fellow faggots. I’m not using the word ‘faggot’ flippantly, but simply pointing out that, at the time, the word was inherently funny to a lot of us (especially when a comedian like Eddie Murphy wrote entire stand-up routines around it).

Though I laughed at a lot of gay jokes back then, I had no real opinion or belief about the nature of gay people at all, nor did I ever feel threatened by folks in my life I knew to be gay. This doesn’t make me a saint; I must admit I still find some gay jokes amusing, as well as flamboyant depictions of them in movies or on TV. I enjoy making gay cracks to my oldest daughter, simply because she is the most open-minded and liberal person I know and my off-the cuff comments bug the shit out of her. But personally, I simply never gave a shit if someone was gay. Someone else’s sexual preference has absolutely zero impact on my life.

On a side note, I've always had the impression that lesbians have, historically, not been treated quite as harshly as homosexual men. Hell, the mere fact that men are considered gay and women are called lesbians (even though lesbian equals gay) is a testament to our attitudes. I don’t know if it’s because there’s no penis in the picture or because most guys (conservative or liberal) actually like the idea of lesbianism (since virtually every porn video features at least one such scene). The bottom line is, it seems like our culture is far more tolerant of gay women than gay men. Please...someone correct me if I'm wrong.

What’s really distressing is the current controversy over gay marriage, which has stirred up an unprecedented level of public homophobia, the likes of which we never saw even in the 70s. This strikes me as sadly amusing. If you truly see homosexuality as a threat, and think gay folks are stalking neighborhoods and school yards with the nefarious agenda of converting all of us into godless sodomites, shouldn’t you be encouraging these guys to join in unholy matrimony in order to keep them off your streets?

But instead, you condemn gay unions as a threat to the sanctity of marriage, because legalizing it will encourage all of us happily married heterosexuals to dump our wives and shack up with a guy from our bowling team, or infect our sons with an insatiable lust for another guy’s hairy ass (because everyone knows homosexuality is more contagious than the Black Plague). Then there are the crazier homophobes (some who are public-fucking-figures) who have blamed gay tolerance for everything from 9/11 to Hurricane Katrina.

But this ridiculous political shitstorm really shouldn’t surprise anyone. We were given a heads-up years ago, when Disney released what is arguably one of their greatest animated films, Beauty and the Beast.

We all know the story…a shallow, selfish and arrogant prince is turned into a hideous animal, and will remain so forever unless he can find someone to love him as a beast. Enter Belle, the beautiful bookworm who agrees to take her eccentric father’s place as a prisoner in The Beast’s castle. During that time, she brings out his humanity and compassion and actually learns to love him. None of this sits well with Gaston, the uber-macho, misogynist hunter who feels threatened by Belle’s affection for The Beast. So he rallies the village into a vengeful frenzy, even though The Beast has always kept to himself, seldom even leaving his castle, has done nothing to harm them personally and whose relationship with Belle doesn't affect their own lives one iota.

But even though Gaston is one of the biggest & irrational douche bags in the entire Disney canon, his actions are mostly motivated by wounded pride. He never gave a shit about The Beast until he was shunned by Belle. I once knew a guy whose wife left him for another woman. Ego-bruising, to be sure, but unlike Gaston, he took the high road and accepted the way things played out. The guy didn’t suddenly declare war on lesbians.

So what about all these current conservative tea-baggers obsessed with preventing gay marriage? Unless a gang of flagrant faggots broke into their house and gang-raped them (because we all know that’s what they live to do), we must assume they must have been similarly jilted like Gaston.

Why else would anyone really care if gays are married?
Posted by D.M. Anderson at 6:45 PM