THE LITTLE MERMAID: What to Expect from Your Dumb-Ass Kid 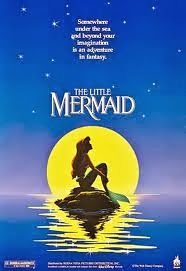 Any of you reading this who had kids after 1984 are probably familiar with the book, What to Expect When You’re Expecting, the de-facto Bible/how-to guide/horror novel for new parents worldwide. You likely received one or more copies from friends or relatives convinced you’d be a prenatal failure without it. My wife and I got three copies during our first pregnancy…one we kept and referred to on a regular basis, one we returned to Target in exchange for extra diapers (after Natalie was born, we quickly discovered free diapers are the greatest gift of all), and one we eventually re-gifted to another expectant couple. Someone even gave us a copy during our second pregnancy, so either they hadn’t been keeping up on current events or felt we totally fucked up the first time.

That book's author, Heidi Murkoff, is no expert. She was just another expectant mother with a shitload of questions during her own pregnancy, and was savvy enough to collect all the answers into a book that has since sold a gajillion copies (as an author whose two novels have collectively sold less than a thousand copies, I fucking hate her). This book is useful enough to keep you from running around the house like you’re on fire whenever a complication arises. However, it’ll just-as-often have you wondering why the hell you and your spouse decided to fornicate in the first place, because babies are fucking scary.

But not as scary as teenagers…

It’s interesting to note that Ms. Murkoff was able to parlay her literary goldmine into a whole series of What to Expect books, with topics ranging from newborn babies to the toddler years, but stopped short of providing parents with the one how-to manual they’ll need the most…What to Expect When Your Once-Adorable Child Turns Into an Irrational, Moody, Self-Centered Prima Donna. That’s because there’s no one who can answer any of her questions. Modern science knows more about the hunting patterns of extinct primates than the inner workings of a teenager’s brain, which is a shape-shifting chasm of drama, resentment, primal urges and an inexplicable taste for Flamin’ Hot Cheetos. No truly useful book exists, and none ever will (no, not even the gut-churning Chicken Soup series).

But you don’t need a book to show you what to expect when your darling little dumpling turns into Damian Thorn. Once you’ve discovered the inevitable three sixes on his or her scalp, just pop Disney’s The Little Mermaid into your DVD player and you’ll get a sneak preview of what the next eight years are gonna be like. If you’re a parent, chances are this movie is already lying around somewhere in the house or the backseat of your SUV, so I probably just saved you some money.

The Little Mermaid is, of course, a modern Disney classic, which almost single-handedly resurrected its animation department after over 20 years of churning out dull, unimaginative kiddie fodder, and the first animated Disney movie many adults went to see even if they didn’t have children. If it weren’t for the success of The Little Mermaid, spearheading the so-called Disney Renaissance, we wouldn’t have gotten Beauty and the Beast, Aladdin, The Lion King, Hercules, Mulan or Tarzan.

Even though it's one of Disney’s best films, it features the dumbest, most impulsive & irrational main character in the studio’s history…Ariel. Despite being born into royalty and comfort, her every need tended to, this teenager defies her father at every turn. She ventures to places she’s forbidden to go, refuses to follow through on her obligations and values the advice of friends over family. And this is before her chance encounter with Eric, who she falls head-over-heels in love with the moment she lays eyes on him. You want to talk about irrational? After alienating her entire family, she runs away, feeling sorry for herself, only to run into Ursula, who encourages her wayward behavior by telling her everything she wants to hear. So Ariel forsakes everything to be with a guy she’s never actually spoken to (I wouldn't have blamed ol' Dad if he suddenly decided to turn his Trident on his own kid to zap some sense into her).

I don’t know about you, but this sounds like the mindset of every modern teenager rendered suddenly stupid by hormones. They stop thinking rationally, shunning family and friends because they’re convinced their first love will last forever and no one else understands how they feel. We’ve all been there, done that. Yours truly went to the ultimate extreme and married his high school sweetheart right after graduation, despite all the clear-thinking folks in my life with totally rational arguments why marrying at 18 was a bad idea. Even with hindsight, I'm still shocked that Ariel is the Disney character I can most-relate to (I always assumed it was Goofy).

This is why The Little Mermaid is arguably the most realistic depiction of teenage infatuation that currently exists on film. It accurately conveys the idiotic conflict and drama you can expect when your own kid’s hormones start raging. When you're considering getting rid of all those old Disney videos your kids no longer watch, you might want to think about hanging onto this one for future reference, because some of you parents will inevitably hear "But, Daddy, I love him!" as your kid's dumb-ass, argument-killing response to any logical retort you think you have in your arsenal. You're gonna want to be mentally prepared for that.