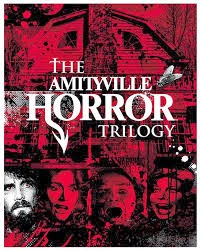 For a brief time in the late 70s, The Lutz family was a household name. Their horrific account of a month of terror in their demon-infested new home was the subject of Jay Anson’s book The Amityville Horror, which scared the living shit out of damn-near everyone and became a phenomenon similar to The Da Vinci Code…the book everyone just had to read. It wasn’t particularly well-written, but what made it truly terrifying was, unlike The Shining or The Exorcist, the Lutz’ story was supposedly true.

Naturally, Hollywood came calling, and The Amityville Horror was adapted into a film in 1979 by American-International (one of their few big-budget attempts to compete with the major studios). In ensuing years, the Lutz’ story has been pretty-much declared total bullshit, but that didn’t stop Amityville from becoming a brand name and long-running franchise. This boxed set features the first three films, the only ones which were actually released theatrically.

In the original Amityville Horror, James Brolin & Margot Kidder play George & Kathy Lutz, who learn why they got their new home so cheap…the last family who lived there were all murdered. Worse yet, the evil which possessed one of the sons to commit this horrible act is still in the house, and they don’t like the Lutz' presence one damn bit. Like the book, The Amityville Horror isn’t particularly well-made, nor is it all that scary. But even though it takes creative liberties by changing details and condensing the story, the movie is a lot of silly fun and seldom boring. There’s also some unintentional humor to be found, mostly because of the performances (Rod Steiger, in particular, attacks his role as a priest with all the overwrought thespianism he can muster). For horror fans who were around when it was originally released, The Amityville Horror is a nice trip down memory lane (still more fun than the pointless 2005 remake), and Lilo Schifrin‘s score remains one of the best ever composed for a horror film.

The same cannot be said for Amityville II: The Possession, which is more technically-proficient and better-acted, but far more disturbing. This one is loosely based on the book, Murder in Amityville (about the actual murders which took place before the Lutzes moved in), where a young man slaughters his entire family, supposedly because he is possessed. What makes this film sort-of an ordeal to sit through is the oppressive & sleazy tone. Top-billed Burt Young is an abusive, despicable lout, and the incestuous relationship between his teenage kids will make you want to shower-off the grime after watching. For added fun, little children get shot. Amityville II is arguably the best-produced in the entire franchise, but while the special effects are impressive and the story fairly interesting, this is far from what you’d call a fun movie.

Amityville 3-D is a sequel in name only, made to capitalize on both the brand name and a brief resurgence of 3-D at the time. Hence, it’s more of a thrill ride than an actual film, and totally defanged of any cutting-edge terror by aiming for the kiddie crowd with a PG rating. It probably boasts the best cast of the three, but they are given nothing to do but react to the proceedings, none of which are particularly scary (or even interesting). I’m also sorta saddened that Richard Fleisher (director of classics like 20,000 Leagues Under the Sea and Tora! Tora! Tora!) resorted to helming cynical products like this in order to stay employed. On the plus side, the 3-D is fairly impressive compared to other movies released at the time (like Jaws 3-D and Parasite), and the film is presented in 3-D on disc for the first time.

All three films are products of their time, released when most of us were still buying into the whole Lutz story. None of them have aged too well, but any horror fan with a respectful nod to the past has to appreciate them for the brief pop-cultural entities they once were. And since this boxed set includes some nifty extras, it's a worthwhile purchase those those who fondly remember these films.