THE LOST BOYS: Rockin’ the Mullet and the Cruelty of Time (Part 3) 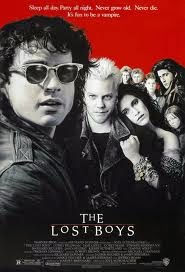 The mullet…the most maligned hairstyle in human history. Entire websites are dedicated to its ridicule, and unless it’s atop the head of an NHL hockey player, we tend to chuckle at anybody still sporting one in the 21st Century. Along with the Sly Stone afro (I had a friend in school who had one so huge he resembled a giant microphone), no other hairstyle so acutely represents the decade from which it sprang. But even today, a guy can get away with a big-ass ‘fro and be considered retro-hip. However, when we see a dude rockin’-the-mullet in the check-out line at Safeway, we automatically assume nobody told him the 80s ended decades ago. I don’t know if this is because it’s a silly haircut or it was just a silly decade. After all, this was the decade that gave us parachute pants, Members Only jackets, headbands, shoulder pads, skinny ties, Union Jack T-shirts and leg warmers, fads which all died the second the ball dropped in Times Square on January 1, 1990 and never came back.

I guess the big difference is once these fads died, you couldn’t get a Member’s Only jacket unless you ventured to Goodwill, but anyone could still “party in the back” if they chose to. And some folks did. Billy Ray Cyrus kept the torch burning for a few years. Actually, so did a lot of country artists and NASCAR drivers, which may be the reason the mullet is now associated with white trash, cheap beer, trailer parks and engine blocks sitting on front lawns. By the time Kid Rock made a career out of cultivating the same image, he intended it ironically.

But for a gloriously-brief time, the mullet was the hairstyle. Everyone from Olivia Newton-John to Michael Jackson to Bonnie Tyler to Rick James to every member of Duran Duran rocked bitchin’ mullets. In Hollywood, the likes of Sylvester Stallone, Mel Gibson and Kurt Russell sported classic mullets in a few of their most iconic films. Mullets were everywhere back then, but never more collectively prevalent than in The Lost Boys. There are more mullets on display here than the entire audience of a Lynyrd Skynyrd concert.

The Lost Boys is a comedic vampire tale with villains a thousand-times cooler than the heroes, all sporting totally-rockin’ variations of the classic mullet. Even Kiefer Sutherland, never renowned for his flowing locks, made us want to be a creature of the night as long we could look and dress like that. But it wasn’t just the myriad mullets which had us captivated. These guys dressed cool too…boots, spandex, trench coats. Yours-truly was hugely influenced by The Lost Boys, cultivating quite an impressive mullet back in the day as well, along with the aforementioned trench coat.

Unfortunately, I was also one of the last to be aware of how stupid the hairstyle looked once the 80s ended. It wasn’t until one of my smart-ass students suggested I visit RateMyMullet.com that I decided to grow all of my hair out, not just the back. Yeah, I could’ve cut it all off, but I never liked how I looked with short hair, so that wasn’t an option. I’d rather look like an aging hippie than a refugee from the 80s.

Despite how hip it was when released, The Lost Boys has aged worse than similar products of its time (like Top Gun & Flashdance), mostly because of the hair. Think about this…if you were to spot some guy today sporting the same hair as John Travolta from Saturday Night Fever, other than thinking he might be due for an oil change, would you really give him a second glance? And if you spotted a gaggle of guys at the mall dressed just like the vampires in The Lost Boys, only without mullets, wouldn’t you figure they’re simply a bunch of emos on their way to Hot Topic? But throw a mullet on those same dudes and we’d assume they just crawled out of a time-traveling Delorean.

Mullets are so hilariously out of place in this day and age that people still sporting them stand out like your grandpa wearing a Speedo at the beach. We enjoy a chuckle at their expense because it’s a hairstyle so-tied to 80s culture that the chances of it ever returning as a fashion choice are minimal. In some ways, that’s kind of sad, because The Lost Boys is actually a pretty great movie…it’s well-acted, funny, kid-friendly and occasionally scary  Sure, there are other goofy things which date it as well, like the pop music soundtrack, the obligatory music montage and the gloriously-blatant homoeroticism of a well-oiled & shirtless sax player rocking out while the crowd cheers him on (speaking of gay, why the hell does Corey Haim have a poster of a smoldering Rob Lowe on his wall?). But overall, it’s a much-better mallrat vampire movie than the Twilight series…

…if we could only get past those goofy mullets.
Posted by D.M. Anderson at 5:42 PM