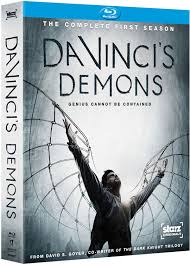 Anyone expecting a history lesson should look elsewhere. Da Vinci’s Demons is not a biographical account of the artist’s life, and about as historically accurate as a Xena episode. It is, however, cut from the same cloth as Starz’ Spartacus (and airs on the same channel), meaning the focus is on fantasy, action, violence, full frontal nudity and sex…lots of sex. Regarding the latter-two details, I came to a few conclusions while watching the eight episodes of the first season:


Anyway, at the start of this series, Leonardo Da Vinci (Tom Riley) is presented as a disreputable, wise-cracking, happy-go-lucky guy (similar to Robert Downey Jr’s take on Sherlock Holmes) whose genius not only saves his life on several occasions, but endears him to Lorenzo de’ Medici (Elliot Cowan), the ruler of Florence, the country on the verge of war with Rome (and its pervert Pope). Da Vinci invents ingenious weapons to defend Florence while bedding-down Lorenzo’s mistress, Lucrezia (Laura Haddock), the show’s femme-fatale because she is manipulating both sides of this conflict in order to save her father. Meanwhile, Da Vinci encounters Al-Rahim, a mysterious man who appears to have the answers to questions about Da Vinci’s past that have been torturing him for decades, and leads him on a quest to find the Book of Leaves (a plot-point I’m assuming will be explored further in Season Two).

That’s the extremely simplified overall plot of the series, which is unnecessarily complicated and confusing. The show is stuffed with way too many characters (good and bad) to keep track of. Even more frustrating is we often have no idea what’s going on from one scene to the next. There were numerous occasions when I felt like I was walking into a movie that had already started and missed something important. Not only that, it was often hard to decipher what a lot of these characters were even saying during crucial plot developments. Then there’s Episode Six, which introduces Dracula (yeah…WTF?) as a temporary villain who simply disappears from the story when the episode is over.

The biggest problem with Da Vinci’s Demons is it actually starts off great, like a gory, sexy and rollicking version of MacGyver. We like how Da Vinci is able to put his foes in their place, using his intellect and skill (including his prowess with a sword). I think this show would have been much better if its episodes were stand-alone stories (like Xena), not part of an ongoing serial. Never mind the fact it gets too serious in later episodes, the story simply isn’t intriguing enough to compel the viewer to keep tuning in every week. The cliffhanger is especially disappointing. I simply don’t feel like my life is incomplete if I never see the ultimate outcome.