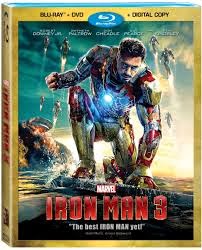 Marvel Studios’ Iron Man 3 pits brash-but-brilliant industrialist Tony Stark/Iron Man against an enemy whose reach knows no bounds. When Stark finds his personal world destroyed at his enemy's hands, he embarks on a harrowing quest to find those responsible. This journey, at every turn, will test his mettle. With his back against the wall, Stark is left to survive by his own devices, relying on his ingenuity and instincts to protect those closest to him. As he fights his way back, Stark discovers the answer to the question that has secretly haunted him: does the man make the suit or does the suit make the man?

Starring Robert Downey Jr., Gwyneth Paltrow, Don Cheadle, Guy Pearce and Rebecca Hall, alongside Jon Favreau and Ben Kingsley, Marvel’s Iron Man 3 is directed by Shane Black from a screenplay by Drew Pearce & Shane Black. The movie is based on Marvel’s iconic superhero, Iron Man, who first appeared on the pages of Tales Of Suspense (#39) in 1963 and had his solo comic book debut with The Invincible Iron Man (#1) in May of 1968.

With the 3D Super Set and Blu-ray Combo Pack of Iron Man 3 about to be released, we chat to Robert Downey Jr. and Don Cheadle – who play Iron Man/Tony Stark and James ‘Rhodey’ Rhodes in the movie – to discover more about the epic superhero project…

How does Iron Man 3 compare to the first two movies in the superhero franchise?
Don Cheadle: I think Iron Man 3 really pays off on the promise that the first two movies had, and we get to see all of these characters in a much deeper way. We certainly get to see the relationship between Pepper Potts and Tony Stark in a much deeper way. Plus, there are very real things that are happening inside this huge CGI world, which helps to really ground the movie. [The movie’s screenwriters] Shane [Black] and Drew [Pearce] have injected humor, too. These things make the whole experience not just about walking in and watching a bunch of pretend things fly around – but there are real-world things happening. It’s a lot of fun.

We see a lot more of James Rhodes in his superhero suit in Iron Man 3, as well as more examples of his military training. Which scenes did you prefer to work on: the action scenes in the suit or the action scenes without the suit?
Don Cheadle: I prefer being out of the suit. The suit is great and it's great to be able to achieve all the things that we want to achieve with the CGI and the motion capture – but I had the most fun running around with Robert [Downey Jr.] and us just physically going after it.

War Machine becomes Iron Patriot in Iron Man 3. Which of the two suits do you prefer, Don?
Don Cheadle: Well, the Iron Patriot is about three kilos heavier, so I prefer War Machine. But, you know, this iteration of the film really is something that Robert and I talked about after the second movie. He came to me and said, “Now, let’s try and really kick this relationship off, and really try to see who these guys are.” That’s why a lot of fun for me in this movie involved being able to do a lot of action outside of the suit, and getting to work with the stunt team and doing a lot of the cable work. That was just a big thrill for me. It was like I was a big kid being able to play with the best toys.

When it comes to wearing the superhero suits in Iron Man 3, Gwyneth Paltrow has called the guys wimps because they complain a lot about them…
Robert Downey Jr.: I admit we’re wimps. In Iron Man 2, Don’s suit was so hard to even pick up to put on him! 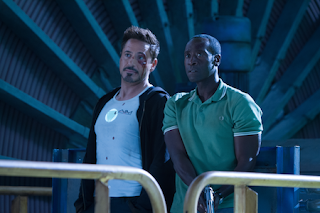 How heavy was it exactly?
Don Cheadle: In the second movie, I’d see Robert putting on just the top of his suit but I’d be putting on the whole suit. He said to me, “Yeah, I told them between [Iron Man] One and Two that they really had to make some changes and make the suit a lot more lightweight.” And I was like, “But wait… Mine weights 7,000 pounds! What are you talking about lightweight?”

Gwyneth Paltrow sounds like a rock star for tackling the heavy suit with such ease in Iron Man 3…
Robert Downey Jr.: Gwyneth came in and she was having a ball. Her kids were there and she was in rocking shape, so it was all nice and easy. I think she wore the suit once or twice only. Listen, it’s a cumulative issue.

What’s it like to work alongside Gwyneth Paltrow in an action franchise like this?
Robert Downey Jr.: I’ve tried to be some sort of guiding light [on the set of the Iron Man movies]. Every bit as often, I would go to set and Gwyneth would be like, “Oh my God, what are we doing? What is this scene again? Shouldn't Pepper...” And she always points true north. Jon Favreau [the director of the first two Iron Man movies] said from the first time we cast her, that she's the heart of the movie – and he’s right.

What went through your mind when you heard that Sir Ben Kingsley was going to join the cast as The Mandarin?
Don Cheadle: We felt like he really classed up the joint, so we were glad to have him there. It was a lot of fun.

How would you describe the relationship between James Rhodes and Tony Stark in Iron Man 3?
Don Cheadle: I feel like you see the relationship has strengthened in this movie, and it pays off on the promise that was made at the end of Iron Man 2 in the Japanese garden where these guys really started busting each other's chops. They are friends, but they still really help balance one another.

How would you describe your working relationship with each other?
Robert Downey Jr.: This time, I’d be working with Don and he’d say to me, “You know that thing where you say something funny and I say something and then you answer it and we do that?” I go, “Yeah, yeah, yeah.” He says, “Could we not do that for once?” And I was like, “Oh yeah. Yeah, great idea.” So there was a lot of give and take.

How would you describe your working relationship with Robert, Don?
Don Cheadle: Do you want me to tell you what he paid me to say or say what I feel? No, it was great to come back this time around. [Iron Man 3 director and co-screenplay writer] Shane Black almost coined and really put a stamp on buddy/action movies – and I was clearly in the pocket with Robert. It was great to see the whole movie put together in the end because we were all on such different tracks. I didn’t know what Gwyneth was doing for half of the movie, so it was great to see it all put together and say, “Oh, that’s what you guys were doing over there.”

Exactly how often did you see the rest of the cast?
Don Cheadle: I saw Sir Ben Kingsley twice on set, which is why it would be great for me to have another bite of the apple [in another Marvel movie] and to be able to mix with these guys a little bit more. But all in all, we had a ball. And Robert is a prince, as everyone knows.