Disc Review: THIS IS THE END (DVD) 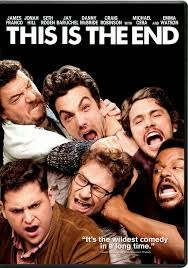 I’ve never been much of a Seth Rogan fan. He’s seldom very funny, and as far as his acting skills are concerned, nor matter the character, I’ve always had the impression that Seth Rogan only knows how to be Seth Rogan. Since he also writes much of his own material, maybe it was inevitable he’d finally cast himself as himself. But early in This is the End, when he’s accosted by a reporter who grills him about playing the same character in every film, I knew this was going to be a different kind of comedy.

A large cast of well-knowns play themselves as well, attending a boisterous L.A. party at James Franco‘s house when the biblical apocalypse, as foretold in the Book of Revelations, occurs. The righteous rise to heaven, leaving the wicked (and everyone at the party) to face Hell on Earth. There are tremendous earthquakes, fires raining from the sky and hideous demons eating anyone who happens to be out in the open. Most of the party guests are sucked into Hell, leaving Franco, Rogan, Jay Baruchel, Danny McBride, Jonah Hill and Craig Robinson on their own. They seal-up the house and ration their water & food (including Franco’s precious Milky Way bar!), but their constant bickering, idiocy and backstabbing threaten to undo everything.

This doesn’t sound like the makings of good comedy, and the film doesn’t start off too well. The idea of actors playing themselves comes across as a cynical gimmick (even with all the self-depreciating comments about their real careers), but once the mayhem begins, This is the End really takes off, becoming loud-out-loud funny. This is when we realize these guys aren’t actually playing themselves, but caricatures of themselves. They seem to be having a lot of fun poking fun at their own images, while at the same time, their “characters” are important in relation to the story.

Still, this movie is a lot of fun, and ironically the most likeable Rogan has ever been in a movie (maybe because he co-directs). I also gotta give props to James Franco, arguably the one cast member who could be remotely considered a serious actor…he’s the one who seems to be having the most fun with his Hollywood image.

This is the End is one of those movies which, because of its references to the here-and-now, may not have a very long shelf life (twenty years on, a lot of the gags skewering its characters’ personas will likely be lost on audiences). But right now, it’s one of the more unique comedies of 2013 and a hell of a lot better than anything Rogan’s name has ever previously been attached to.