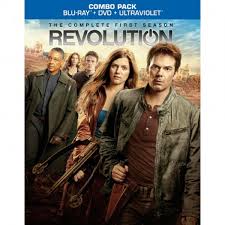 When I write disc reviews, I usually keep IMDB.com open for quick access to crew, cast & character info. I’m on the Revolution page right now, having a good chuckle at the various “reviews” written by visitors who hated the show. I’m not laughing because their opinions differ from mine. I’m laughing because of their reasons, most of which are related to the implausibility of the show, plot holes or its so-called faulty science. I came to one clear conclusion after reading these reviews (as well as those on Amazon): There are ton of people in the world who need to lighten-the-hell-up.

If you are one of those folks who can’t see past lapses in realism, logic or text-book accuracy in order to enjoy something intended as pure escapism, I feel sorry for you. Revolution is not science; it’s drama. It’s not a speculative documentary; it’s a post-apocalyptic soap opera, and a damn good one at that. My wife and I watched all 20 episodes of this Season 1 boxed set in two days and not once did we concern ourselves with such petty details as how quickly its characters are able to traverse the country on foot, the availability of food & weapons or whether or not someone could run out of air inside a miles-long subway tunnel. If a piece of entertainment is done well enough, I’m able to roll along with it and accept its rules (after all, how else can one enjoy Star Wars?).

The premise of Revolution is a very intriguing one: what would happen if we suddenly lost all electricity, including batteries and combustion engines? What would society look like 15 years later? Revolution pessimistically speculates mankind at its worst…anarchy, starvation, the country divided into mini nations ruled by power-mad dictators. Of course it does, because who the hell wants to sit through a series where everyone gets along and bands together for the betterment of mankind? For a post-apocalyptic series to really work - and few of them have - we want violence, action, larger-than-life heroes (or better yet, antiheroes), vile villains and a compelling reason to tune in every week. Revolution accomplishes all of that because it’s a drama, not intended to be picked apart by those pathetically hung-up on realism. It knows its strength lies in its characters.

The show’s central character is Miles Matheson (Billy Burke…Bella’s dad in Twilight for all of you under 20), who’s reluctantly recruited by his niece, Charlie, to rescue her brother from “Bass” Monroe, the psychotic dictator of the Monroe Republic, one of the many territories of the fractured United States. The ongoing problem is Monroe & Miles were best friends before the “Blackout”. In fact, as episodes progress, we learn Miles has an extremely dark past (he was once the head of the Monroe Militia, who slaughtered thousands, and a great deal of the story arc focuses on revealing, piece-by-piece, the relationship between Miles & Bass). This is only one of many character subplots presented in the first season (most of which are explained through flashback scenes). Nearly every major player in Revolution is given a comprehensive backstory, arguably the show’s greatest strength. Not only do we learn of our heroes’ motivations, but the villains’ too, similar to Stephen King’s epic, The Stand. Nobody is good or evil in the black & white sense. For the most part, we are made privy to how these characters choose sides, and while we may not condone their actions, we kind-of understand them. This is especially true with Miles, a reluctant “hero” if there ever was one, perfectly played by Burke.

That’s not to say we necessarily identify with all of them, which may be the show’s biggest fault. As the female lead, Charlie is a hard character to embrace. She doesn’t come across as very likeable, even after she’s lost most of her family. She’s bossy, overbearing and occasionally helpless whenever the story requires her to be. Considering how well fleshed-out nearly everyone else is, Charlie seems more like a plot device than anything else…a damsel in distress, a moral compass, a teen-bating love interest, a killing machine…it all depends on the direction of the episode. The same could be said about her mother, Rachel (Elizabeth Mitchell), whose personality seems to change depending on plot requirements.

Revolution isn’t without the same faults prevalent in most serial TV either; it’s sometimes needlessly padded-out with occasional slow stretches, too many characters to keep track of and an overabundance of plot twists. Still, the overall story is compelling enough to keep viewers interested, perhaps even more-so with this Season 1 boxed set, where the momentum isn’t hampered by commercial breaks and week-long interims between episodes. In addition, the production values are top-notch for a TV series, giving the show a much more epic look and feel than the typical SyFy Channel show.

I briefly made mention of The Stand in this review because it is obvious that novel had a huge impact on this show’s creators. It’s even briefly referenced in an episode, along with a few other King stories. Other, perhaps less noticeable, influences are The Walking Dead and Star Wars. Revolution tries to achieve the gritty tone of Walking Dead and sometimes comes close (though it’s not nearly as visceral or intense). Storywise, Revolution sometimes comes dangerously close to replicating scenes, characters, plot twists and dialogue from the original Star Wars trilogy. A seemingly odd influence, but trust me, you'll feel some serious deja vu in several scenes. Speaking of which, now I wonder how many of the Revolution naysayers on IMDB, up-in-arms over this show's science, would have unleashed the same venom on Star Wars if the internet was around back then.

Science and logic be-damned, Revolution is a fun, disposable and compulsively-watchable post-apocalyptic soap-opera, arguably better on disc than it was on broadcast TV. Like so many other promising and expensive sci-fi programs that quickly fizzled out, I’m skeptical as to whether or not it can maintain its momentum in Season 2, but at least I feel intrigued to find out.