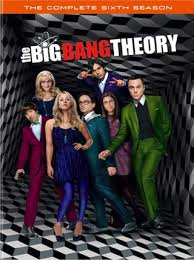 On paper, the concept of The Big Bang Theory seems like something destined to last a season or two. But here we are, six seasons later and it’s just as fresh and funny as ever. While I like the show, it was never something I always went out of my way to watch. The older I get, the less I feel like planning my schedule around a program’s weekly time slot, much preferring to watch them at my leisure on disc.

Like Friends, That 70’s Show and Seinfeld, Big Bang Theory lends itself well to marathon viewing on DVD. Similar to those programs, episodes are loosely-plotted. Though there are a few ongoing running gags or story strands, viewing them in chronological order isn’t really required, even though Season 6 does start off with a thread left-over from the previous year (Howard’s adventures on the International Space Station, the closest this show ever came to jumping the shark).

Of course, the cast is larger now; the only character without a steady girlfriend is Raj, though he briefly hooks-up with Lucy, a mousy girl who suffers from extreme social anxiety. At first, I was dubious at the idea of the main characters all having love interests, but they’ve since-been well-ingrained into the show, with plenty of amusing personality quirks of their own, especially Amy (Mayin Bialik) as Sheldon’s girlfriend. While Jim Parsons remains the show’s MVP, Bialik is often just as funny in the scenes they share.

Season 6 features some great cameos by the likes of Wil Wheaton, Bob Newhart and astronaut Mike Messimino. Wheaton shows he’s a good sport regarding his own acting career, and Newhart manages to steal the entire episode he appears in (playing a former kiddie-show host, forgotten by everyone but Sheldon & Leonard).

The ratings for The Big Bang Theory have been steady climbing ever since the first season (Season 6 was the most-watched so far). As long as the writing remains fresh and future new characters are well-developed, this show could be around for a long, long time. Like previous seasons, this boxed set is well-worth picking up by both newcomers and long-time fans, since most of the episodes are worth seeing more than once.