THE DECLINE OF WESTERN CIVILIZATION II: THE METAL YEARS: An Unfortunate Time Capsule 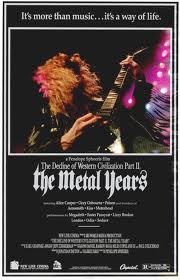 I’ve been a heavy metal fan most of my life. Even today, in my 50s, I still prefer Anthrax over Adele, Pantera over P!nk, Metallica over Morrisey, Judas Priest over Josh Grobin, King Diamond over Neil Diamond. As far as musical sexpots go, I’ll take Doro Pesch over Shania Twain any day. At my age, I may not be one of those idiots moshing themselves bloody during a Slayer concert, but you can damn-well bet I’m in the balcony, overpriced beer in-hand, whenever the band is in town. During long-ass drives to my mother-in-law’s house, there’s an unwritten rule that whoever is behind the wheel gets to control the radio. Hence, I subject my family to endless miles of Tool, Motorhead, Opeth & Iron Maiden (my oldest daughter hates metal, but probably knows all the words to “Run to the Hills”). A lot of those bands I've mentioned might be considered old farts, so just to confirm I’m not a completely out-of-touch old fogey, I also enjoy a lot relatively new stuff like Disturbed, Gojira, Five Finger Death Punch & Mastodon.

Metal appeals to me because it’s forceful, dramatic and somehow more cinematic than other genres. It demands your attention and refuses to be background noise while you mow the lawn or do the dishes. One can’t simply regulate Ronnie James Dio’s epic voice to the background as easily as Gotye’s. I know I’m in the minority on this, not just because of my age (most folks think my love of metal is kinda weird), but because this music (with the possible exception of Metallica) has never been truly embraced or respected by a vast majority of both snooty critics and casual listeners. And I think there are two main reasons why…

First, a lot of hard core metal fans have always looked and behaved like idiots. From the spandex-clad, Madonna-hating dorks of Heavy Metal Parking Lot, to the baseball-capped thugs who used Woodstock ‘99 as an excuse to rape and burn shit, to the mascara-smearing emos who think Black Veil Brides are the soundtrack to their miserable lives…these folks are largely responsible for the perpetual low public estimation of the average metal fan's intelligence. I actually understand that. As much as I love heavy metal, I generally can't stand being around other people who love heavy metal. For me, it was never a way of life, never a signal to break stuff or become an animal, never a clarion call of anarchic rebellion. I just like how it sounds….and that’s it.

Second, many of the bands of the 80s who received a majority of the media’s attention were 'hair metal' bands, where the focus was almost always on how hard they partied, run-ins with the police or Tipper Gore, the number of groupies they fucked or their simple-minded attempts to pander to teenage boys while alienating parents. Most of these bands unceremoniously crashed & burned by the end of the decade. Though the genre eventually evolved into something perceived as less shallow and image-driven, mention the term ‘heavy metal’ to the average non-fan today and they’ll still likely recall a bygone era of leather & studs, spandex, huge hair, sleazy videos and debauchery…the ultimate example of 80s excess.

Both are on full display in The Decline of Western Civilization Part II: The Metal Years, the now-infamous documentary released at the pinnacle of the genre’s popularity, which has become more than a simple document of metal culture at the time. In fact, because it is mostly focused on the hair metal scene, it ceases to be an accurate depiction of the genre at all, which really disappointed me back then. I truly thought it was going to be a long-overdue look at the music I loved so much. Instead, I felt like director Penelope Spheeris mostly focused trying to capture a train-wreck in action and feeding everyone’s clichéd perceptions about metal music, those who created it and the dumb-asses who worshipped it.

The film features interviews with established rock stars, young hopefuls on LA’s Sunset Strip looking for a break and obsessive metal fans whose devotion influenced how they groomed and dressed their kids. We see a lot of metal luminaries: Steven Tyler from Aerosmith, Alice Cooper, Ozzy Osbourne, Dave Mustaine from Megadeth, Lemmy from Motorhead, Paul Stanley & Gene Simmons from KISS and all four members of Poison. A few of them come across as fairly intelligent, but many others make asses of themselves with their arrogance, vanity, sexism or wince-inducing attempts at philosophizing. The most famous scene involves W.A.S.P. guitarist Chris Holmes, whose drunken, self-destructive rants between guzzling bottles of vodka is painful to watch.

These stars’ attitudes is contagious, evidenced when we watch hilarious-yet-embarrassing segments of struggling local bands trying to achieve similar success. With the exception of Lizzy Borden, most of these guys act like they’re already rock stars on the verge of world domination (probably because they’re on camera). Some of the delusional and sexist shit that flies from their mouths comes across as calculated attempts to pander to a fan base they hadn’t-yet acquired (and most never would). What’s both hilarious and sad is we’re certain these idiots think this is how they’re expected to behave.

Watching this movie in the late 80s, I just knew it confirmed naysayers’ opinion that metal was music made by idiots, for idiots. But 25 years later, it is obvious Decline II was never about the music…it’s about a particular moment in time that its subjects naively assumed would last forever. In fact, the film could have just-as-easily been made in the 50s, instead featuring equally-untalented actors migrating west in hopes of being discovered.

Director Penelope Spheeris’ timing was perfect. Because Decline II was released near the end of the decade, it's often-cited as one of the nails in the 80's metal coffin (along with rap, Beavis & Butthead and grunge), ‘exposing’ viewers to its shallowness and sexism. Whether or not that assessment is valid is obviously subjective, since there were a lot of brilliant metal artists who weren’t bragging about banging groupies. But there are some facts about Decline II which cannot be disputed, cinematically, culturally or musically:
The Decline of Western Civilization II depicts the genre I love in a mostly-negative light, narrowly focusing on the Hollywood glam scene, and I hate it for that. It wouldn’t be until decades later that director Sam Dunn would give this music the serious cinematic respect it deserves (Metal: A Headbanger’s Journey…a must-see). Still, for all of my resentment, Decline II is probably the most entertaining documentary I’ve ever seen, maybe because I’ve never really cared about the music’s image anyway. I can still look at this morbidly fascinating film and have a good laugh at the expense of its subjects, just like those who’ve always hated this music.
Posted by D.M. Anderson at 12:28 AM