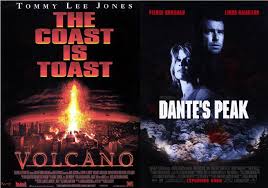 These two films were released in the same year, each with the similar premise…a natural disaster in the form of a volcanic eruption. Because I’m a die-hard disaster fan (terrified of lava since I was a kid), I rushed out to see both. Dante’s Peak came out first, followed a few months later by Volcano. Though Dante's Peak did better at the box office, I truly enjoyed both. But which is truly the better of the two movies? By better, I mean how well did each film incorporate standard disaster-genre conventions? We’ll use Free Kittens’ patented 10-Point Comparison for a side-by-side analysis, then tally-up the final score to determine the winner.

Plot/Setting/Originality - Hey, they’re disaster movies, so ‘originality’ is a probably moot point. Volcanic eruptions have been done before in films like The Devil at 4 O’Clock, Krakatoa: East of Java (BTW, Krakatoa is west of Java) and Irwin Allen’s career-killing When Time Ran Out.  Dante’s Peak is more like a traditional 70’s disaster epic (similar to Earthquake) about a long-dormant mountain in Eastern Washington on the verge of exploding, threatening a fictional resort town. Its plot and story appear to be inspired by the Mt. St. Helens eruption in 1980. Volcano’s disaster happens in the middle of downtown Los Angeles at the start of the morning rush hour, taking the Independence Day approach of depicting the destruction of iconic landmarks. We’ve seen small villages and towns ravaged by eruptions before, but Volcano is the first one I’m aware of which takes place in one of the world’s biggest cities.
Winner: Volcano

Leading Man - Let’s see…Pierce Brosnan or Tommy Lee Jones? Brosnan’s obviously better looking, but though he’s decent in Dante’s Peak, he pretty-much plays the same guy in everything he does. When he’s occasionally forced to truly emote, we get the impression he’s saying, “Hey, look at me act!” (at least he doesn’t sing in this one…ugh). Jones is the better actor, although ever since The Fugitive, he plays a variation of Gerard in all of his action films…that sad-eyed, gruff & grumpy guy whose laconic, deadpan delivery has been the saving grace of many movies. He can do more with a simple expression than other actors can with a page of dialogue.
Winner: Volcano

Leading Lady - Most of us will forever associate Linda Hamilton with Sarah Connor, who’s initially helpless but turns out to be quite resourceful. Hamilton doesn’t have a ton of range, but she’s appealing in Dante’s Peak for many of the same reasons we loved her in The Terminator. On the other hand, we will mostly remember Anne Heche as the trendy lesbian who briefly hooked-up with Ellen DeGeneres, mainly because she can’t really act (just check-out Six Days, Seven Nights). She’s especially annoying in this one.
Winner: Dante’s Peak

Needlessly-Stupid Supporting Characters - What disaster movie would be complete without these laughably daffy dumbasses, a tradition dating back to Airport?  We love ‘em. Such characters usually fall under four categories:
Dante’s Peak features a few of these folks:
Volcano really has only one, but he’s a doozy:
Winner: Volcano (if awarding quality over quantity)

Children In Peril - A disaster movie staple since the 70s…kid characters whose only purpose is to put themselves in immediate danger after doing something really dumb, so the hero must risk his own life to save their dumb asses. With rare exception (like The Swarm), they always survive (swelling music; teary hugs), even though they’re often so sickeningly cute or loud & obnoxious that they don’t deserve to. Dante’s Peak has two of these stupid kids, a brother and sister who decide to drive up the mountain during the eruption to rescue their stubborn grandmother. But hey, at least they’re mostly likable. Not so with Volcano, in which Jones' flippant, eye-rolling teenage daughter suddenly becomes a helpless, quivering idiot when disaster strikes, only to inexplicably become heroic during the final act (doing something foolish so she can be rescued by Dad).
Winner: Dante’s Peak

Dogs in Peril - Both pictures present poor pooches in perilous predicaments. Both dogs are loveable mutts. Both survive to be tearfully hugged by their masters. In reality, both would likely have met horrible, fiery deaths, but who the hell wants to see that?
Winner: Dante’s Peak, simply because it’s a recurring character throughout the film. Volcano’s dog-in-peril shows up for two minutes, and is one of those squeaky tiny dogs old ladies like to carry around in their purses. I hate those.

Dante’s Peak:
Harry Dalton: My 9th grade science teacher always said that if you put a frog in boiling hot water, it would jump out. But put it in cold water, and heat it up gradually, it would slowly boil to death.
Nancy: What's that Harry? Your recipe for frog soup?
Harry Dalton: It's my recipe for disaster.

Winner: Dante’s Peak because you gotta admire anyone can work ‘recipe for disaster’ into a disaster movie, uttered with a totally straight face. Extra kudos to Peak for forcing Brosnan’s character to compare lovemaking to riding a bike.

Action - It’s quite a long time before the mountain explodes in Dante’s Peak. Until then, we mostly watch occasional signs of impending catastrophe, conflict between Brosnan and his clueless boss, or verbal foreplay between Brosnan and Hamilton. Volcano initially attempts to suggest chemistry between Jones and Heche, only to toss that subplot aside because, not only would nobody buy it, no one watching a movie like this really gives a damn. We came to see death and destruction, and Volcano wastes little time getting to the action.
Winner: Volcano

On-Screen Destruction/Special Effects - For the most part, both movies have decent special effects for their time. Volcano features the most interesting shots…magma flowing through LA streets, surrounding buildings catching fire and the occasional ‘lava bomb.’ However, although Dante’s Peak has considerably fewer FX shots (and a lot less lava), they look more realistic. We see buildings blown apart, bridges collapsing, helicopter crashes and vehicles tossed through the air like toys. It even throws in a flash flood which kills its biggest Needlessly-Stupid Supporting Character. Not only that, the eruption scenes are eerily reminiscent of the Mt. St. Helens explosion of 1980.
Winner: Dante’s Peak

Scientific Plausibility/Climax - We need to approach this point two-fold. First, do we ever, in real life, worry about a nearby mountain suddenly exploding? Maybe, because it’s actually happened (like Mt. St. Helens in 1980). But do any of us ever worry about lava suddenly spewing from our congested downtown streets? No, because it’s never happened (at least in America). Could it happen? Sure, I guess. At least the science presented in Volcano convinces us so. But since it actually hasn’t happened, we tend to blow-off such an idea. Second, just how realistic are the climaxes of these films? Both movies stretch plausibility to its limit in their final scenes. Volcano would have us believe that magma, the most destructive liquid on Earth, can be diverted with a few well-timed explosions. Hell, I can’t even keep water from seeping into my attic, so how’s that gonna work?. Meanwhile, Dante’s Peak tries to convince us that a beat-up old pick-up, traveling on four flat tires and loaded with survivors, can outrun a volcanic explosion which blows apart buildings like they were made of Lincoln Logs. I don’t even think Jeff Gordon could do that.
Winner: Dante’s Peak, by the slimmest of margins

It was close, but Dante’s Peak is the winner here. I’m actually kinda surprised because I personally think Volcano is the more fun movie of the two, which also features an amusing final shot of the newly-formed Mt. Wilshire while Randy Newman’s bouncy classic, “I Love LA,” plays in the background. It lets us know the filmmakers probably didn’t take their premise as seriously as those who made Dante’s Peak. But hey, numbers don’t lie. Still, both films are the best two examples of volcanic disaster movies ever made, which may be a somewhat dubious distinction, since the third best is likely one of those SyFy Channel cheapies.
Posted by D.M. Anderson at 12:10 PM