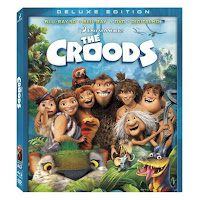 At the beginning of the 2012 NFL season, I wouldn’t have given the Baltimore Ravens a snowball’s chance of winning the Super Bowl because, on paper, they simply didn’t match up to the Falcons, Patriots, Broncos, 49ers or Eagles. So I wrote ‘em off.

I wrote off The Croods, too. To be honest, I was prepared to hate this movie from the day I saw the first trailer, which made it look like pre-digested swill created to part parents from the cash in their wallets just to shut their kids up. The ads were dumb, generic and pandering, appealing to undemanding kids still bowled-over by CGI & 3-D. Worse-yet, its casting of Nicholas Cage, Ryan Reynolds & Emma Stone reeked of a desperate stunt to plant more adult butts in theater seats. Further damning was the fact one of its co-directors was responsible for Space Chimps (ahh!). On paper, this sounded like the worst movie ever. While my youngest daughter wanted to see it, I’m pretty sure I told my wife I’d rather shit glass than sit through this cynically-produced product.

But, as ESPN’s Chris Berman loves to say, “That’s why they play the game.”

I’ll be damned if The Croods didn’t turn out to be the funniest, most-entertaining family film I’ve seen since Toy Story 3. Maybe it’s because my expectations were low, but I personally enjoyed it more than Pixar’s recent (and more-ambitious) films, Cars 2, Brave and Monsters University. This is actually hard to admit, since history has so-far shown Pixar to be the New England Patriots of CG animation, while most other studios are  the Cleveland Browns. However, Dreamworks (the studio which actually produced The Croods) has occasionally risen to the occasion and made the playoffs (Shrek, How to Train Your Dragon).

The story itself is somewhat similar to the godawful Ice Age: Continental Drift, only with a family of dimwitted cavemen, led by the overprotective Grug (Nicholas Cage), who keeps all of them safe by instilling a healthy fear of everything in them. They spend their nights in the safety of a cave, venturing-out every few days to hunt for food. His teenage daughter, Eep (Emma Stone) longs to see more of the world and resents Dad’s over-protectiveness. Then she meets Guy (that’s his name, played by Ryan Reynolds), who’s her age but a lot smarter and more-evolved than the rest of her family. He introduces them to such wonders as fire, footwear and traps to make hunting easier. Guy also informs the family their world is ending (because of the continental drift), but he knows the way to safety and suggests they should come with him before it’s too late. Much of the story centers around the conflict between the idealistic Guy and Grug, who’s stubborn and resents this young kid’s intrusion on the family (especially Eeps infatuation with him).

The Croods is a very funny film, with humorously-kinetic set-pieces, such as the first time we watch the family’s daily hunt and their first encounter with fire. The movie is loaded with clever sight gags and funny dialogue. The story itself, while not exactly original, is fast-moving and fun. And unlike many animated films which boast celebrity voices for no reason, the actors’ talents are well-utilized. Sure, Nick Cage hasn’t been in a good live-action movie in a long time, but he’s terrific as Grug, partly because we know it’s Cage, but also because his oft-weary voice is perfect for the role. I also gotta hand it to Cloris Leachman as Gran; she manages to inject some fresh humor into the clichéd feisty-old-granny.

The movie’s also gorgeous to look at. The backgrounds, as well as the climactic cataclysm, are nearly photo-real; all characters are distinctive & vividly-depicted, with physical features exaggerated just enough to accentuate their personalities; the various critters they encounter on their journey - mostly products of the animators’ imaginations - are colorful, creatively rendered and often endearing. The overall quality of the animation is at least on par with Pixar’s work, and far better than what most other studios are churning out (including Dreamworks' own beloved Shrek movies).

So I was happily wrong in my pre-assessment of The Croods. Chris Berman was right. You can’t always go by stats or a team’s track record (after all, the Philadelphia Eagles, highly-touted Super Bowl contenders in 2012, didn’t even make the playoffs, while the Peyton Manning-less Indianapolis Colts did). I wanted to write it off because it wasn’t by Pixar, the ads were stupid and Nicholas Cage seemed like a dubious promotional tool.

Ultimately, I’m glad I didn’t, because The Croods is an unexpected winner.

Blu-Ray Special Features:
● The Croodaceous Creatures of Croods! – Find out more about your favorite Croods creatures
● Be An Artist! – Now you can draw Belt, Macawnivore and Mousephant
● The Croods Coloring & Storybook Builder App
● Belt’s Cave Journal – Take a journey with Belt and Guy as they rescue a Jackrobat
● World of DreamWorks Animation – Music videos from your favorite DreamWorks Animation feature films