FRIDAY THE 13TH - THE FINAL CHAPTER and the Grand Day Out 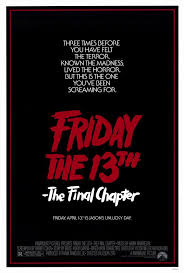 I find this movie especially depressing. Has there ever been a movie you’d be happy never to see again because it reminds you of a time in your life you’d rather forget? For me, Friday the 13th - The (not-so) Final Chapter is one of those.

It was in early 1984 that I was kicked out of the Air Force before I even made it out of basic training. I wish I could claim a defiantly-cool reason for my discharge, like kicking the drill instructor in the nuts or something, but I simply couldn’t pass my locker & bunk inspection (fucking hospital corners…what the hell’s the point of those anyway?). While a tiny part of me was actually a little relieved because San Antonio winters are a bitch, this was a soul-crushing blow. I ended up back home in Portland with no real job prospects, no particularly employable skill and a first-wife whose assessment of me as a loser likely began to develop the second she picked me up at the airport.

We didn’t exactly have money falling out of our asses before I enlisted because job retention was a skill I hadn’t mastered (hell, I even got fired as a telemarketer). Now our financial situation was dire indeed. The day after I got back home, I started hitting the pavement looking for something - anything - to help keep us afloat. The only things I found where no experience was required were commission sales jobs, such as the one I finally landed which involved selling expensive sets of children’s books and encyclopedias.

This company was run by two guys, Dennis and Richard, whose so-called “office” was located on the second floor above an Asian grocery store. Every wall was covered in cheap wood paneling; the floor sported worn, matted shag carpet. Dennis also lived in one of the back rooms, sleeping on a mattress and heating his meals with a toaster oven. Richard drove around in a Mercedes, which he continued to remind me was paid-for in cash from selling these children’s books. He also made a considerable amount of money selling mail-order pornography from the same office, books with such enticing titles as Butthole Parade and Lesbian Love.

Anyway, after a successful ‘rite of passage’ which involved knocking on a family’s door unannounced and talking them into parting with $1000 (using a pitch created to convince parents their kids will be babbling idiots without these books), I earned my stripes and became part of the team, collecting a $150 commission for every set sold. However, from here on out, it would be through appointments set-up by Richard, whose bullshitting phone skills were second-to-none; he made this seedy little enterprise sound like the Scholastic Book Fair had just rolled into town.

Despite my new employers’ questionable background, I initially made quite a bit of money, sometimes as much as $450 per day, a lot even by today’s standards. Eventually, we took week-long road trips around the northwest, hitting small towns in Idaho and Montana with local phone lists Dennis & Richard managed to acquire. Yeah, I had to pay for my own gas, food and motel rooms, but I was earning enough commission sales to make it worth it. At least for awhile…

The problem with any kind of commission job, especially those which involve lengthy in-home presentations, is it’s feast or famine. I’d go through periods thinking it wouldn’t be long before I was driving my own Mercedes. Then there'd be long stretches of home visits where I’d do my whole presentation, only to leave the house an hour later with nothing to show for it. It also didn’t help that, while I enjoyed the money, I didn’t really enjoy the job itself, and it started to wear on me after awhile. I’ve never been what you’d call a people person, so repeatedly maintaining this friendly façade (a huge requirement in this line of work) was difficult and exhausting. And since I wasn’t a “born salesman,” a bit of guilt began to creep in. I was trying to sell phenomenally expensive sets of books by pretending to be an authority on education. Enthusiastically claiming I bought them for my own kids (I had none at the time) left a bad taste in my mouth. In fact, other than the sample volume I used in presentations, I'd never actually seen the books I was pushing on others.

My sales started to decline to the point when, during our second run through Missoula, Montana, I was barely earning enough to pay for my travel expenses. Richard and Dennis, used to the ebbs & flows of the business, were definitely saving the best sales prospects for themselves. Also disconcerting was the fact my wife hardly ever answered whenever I called home, even at 11:00 PM on weekdays. The few times she was home, when I asked where she’d been, she simply said she was at her sister’s.

One day during this trip I went to Richard’s room to get my list of potential customers. He answered the door, red-eyed & hungover, and said…“just go start knockin’ on doors, man, and you better get a sale cause I ain’t payin’ for your room.” I could feel the familiar dark cloud of despair forming over my head that instant…despite the initial euphoria of quick cash, the very people who sucked me into this line of work were not only abandoning me, but willing to leave me stranded in Missoula because I was no longer making them money. Worse yet, I knew the rent was due back home and had nothing to send. Hell, I didn’t even know how I was gonna afford the gas for the 500 mile drive back to Portland (maybe if I had offered copies of Butthole Parade as a bonus to the kids’ books, I’d have kept raking-in the green).

Simply put, if I didn’t make a sale that day, without the help of the hucksters who duped me into thinking I’d get rich, I was screwed. Sometimes - even today - when I become overwhelmed, I shut down and retreat into a world which may not solve my problems, but at least makes me forget about them for a few hours…the movie world.

I drove around Missoula most of the day, only occasionally stopping to knock on an inviting door (where I was mostly rejected, save for a single, hard-earned sale which would at least fill my tank, pay for my room and buy some groceries). But mostly, I smoked a lot of cigarettes and felt sorry for myself. As evening set-in on the way back to the motel, I spotted the marquee of a four-plex theater. It had been a few years since I went to the movies alone, and even though I could scarcely afford it, suddenly nothing sounded better. Movies have always been my ultimate escape, and right then, I really needed to get away from everybody. Before I knew what I was doing, I pulled into the parking lot, marched to the box office and bought a ticket to Friday the 13th - The Final Chapter. Then I made a bee-line into the theater without even stopping for a bag of popcorn.

I was never a gung-ho fan of the Friday the 13th series, even though I’ve seen them all, mostly on video. There’s nothing really clever, scary or original about them. Still, like ordering a Denny’s Grand Slam breakfast at 2:00 AM after the bars close, at least you know what you’re gonna get. When you go to Denny’s in the middle of the night, you aren’t looking for adventurous cuisine…you just want your belly full, often to counteract all the alcohol you ingested, a hunger which can only be sated with breakfast food. Similarly, the Friday the 13th films never attempted to re-invent the wheel or challenge the intellect. They’re just dumbed-down versions of And Then There Were None, with horny teenagers. Touted as the ‘final chapter’, this fourth film in the series provided a much-needed release for me at the time. With all the baggage I was carrying around, this admittedly-shitty movie (though Jason’s “death” was actually pretty cool) proved to be temporarily cathartic. For 90 short minutes, I forgot all my problems, and no matter how crappy I thought my life was at the time, at least my day wasn't likely to end with a machete to the face.

The weight of the world climbed back on my shoulders the second I left the theater. Back at the motel, I gave Richard the paperwork to my only sale that day. He looked at me contemptuously and said, “That’s it?”, even though it was obvious he hadn’t left his room all day. He shut the door on me without another word. What I wouldn’t have given for Jason Voorhees to pay him a little visit.

Back in my own room, I tried calling my wife again. She wasn't home. I might not be the brightest crayon in the box, but it didn’t take a super-genius to deduce she probably wasn’t spending all those nights at her sister’s. Still, I never brought it up when I got back home a few days later because we had bigger problems, like the eviction notice she greeted me with as I walked through the door. I suddenly had no income either; I showed up for work to find the office completely empty. Upon returning from Montana, Dennis & Richard had cleared the place out and disappeared, still owing me money. Things only got worse from there, but that’s another sad tale.

As for Friday the 13th - The Final Chapter...it isn't the best or worst in the series, though it's arguably the bloodiest. But even if it had turned out to be the greatest horror movie of all time, I doubt I'd ever want to see it again. It reminds me too much of one of the more depressing times in my life.
Posted by D.M. Anderson at 4:31 PM