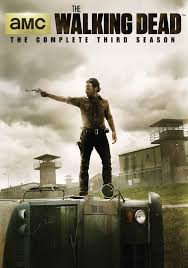 At this point, AMC’s The Walking Dead is more than just the greatest horror series of all time. Unlike many serialized shows which start out great only to run out of ideas really fast, this show just keeps getting better. That’s remarkable when you consider the built-in limitations of the zombie sub-genre. But here we are, three seasons later, and The Walking Dead is just as edgy, suspenseful and shocking as ever. It’s also since-transcended its genre, becoming a program compulsively watched by millions, many  who wouldn’t be caught dead (no pun intended) watching a regular zombie film, even though this program is gorier than Romero at his most devious. God forbid, The Walking Dead has actually made the zombie sub-genre respectable.

Still, I’ve always had a major problem with the show as-aired on AMC. After the first episode of Season One, I stopped tuning in for two reasons. First, this show sucks you in with its smart dialogue, outstanding performances, complex characters and compelling plot twists, all of which combine to make it hard to turn away. Then a commercial pops up, breaking the spell. Second, while I understand the purpose of serialized TV shows is to make viewers tune in each week, The Walking Dead isn’t so much a serial as it is an epic film trapped in a TV show’s body, unfortunately chopped up into smaller pieces. Imagine ordering the greatest-tasting pizza of your life, but only allowed to eat one slice per day. Then AMC had the balls in Season 3 to stick an 8-week hiatus halfway through its run, forcing everyone to wait until spring before it continued (word of warning: they're also planning on doing this in Season 4).

This is why I wait every year to watch the show when it comes out on disc. Sure, the year-long interim is sometimes agonizing, especially when friends and co-workers want to talk about the show during its TV run and I’m forced to say, “Don’t say a goddamn thing or I‘ll kill you!” But it’s worth it. The Walking Dead is a show born for home video, free from commercials and week-long intermissions. There’s nothing cooler than freeing-up an entire summer Saturday to claim a spot on the couch and indulge in nearly 700 minutes of the greatest undead story ever told.

As terrific as Season 2 was, Season 3 is even better. Picking up several months later, Rick Grimes and his group find refuge in an abandoned prison. They hope to stay and rest awhile, grow some crops and allow Lori (Rick’s now-estranged wife) to have their baby. However, they also end up facing the most evil & vile character in the show’s short history, The Governor, a psychotic megalomaniac who rules like a dictator over a nearby fortified town. As usual, there are many subplots, new characters (the most interesting being Michonne, a dreadlocked, ass-kicking chick who trusts almost nobody) and some returning ones (Michael Rooker’s welcome return as Merle, just as sleazy & self-serving as ever). And, like the previous two seasons, no one’s safety is assured…one of the cool things about The Walking Dead is it’s even less-afraid than 24 to kill-off major characters.

On a visceral level, one thing which continues to amaze me is the level of realistic violence. The show continues to push the envelope in onscreen bloodletting, featuring increasingly creative methods of dispatching the undead (though the most cringe-worthy scene is easily the C-section birth of Lori’s child). The Walking Dead is not-only the most graphically violent show of all time, but gorier than any previous zombie film I’ve ever seen that earned an X or NC-17. What's amazing is I have a friend who read the original Walking Dead comics, and he said the show actually tones-down the violence. As someone who doesn’t read comics, I can’t begin to imagine how sick those books must be. At any rate, the special effects in the show are still amazing and really, really icky.

Season 3 ends with an agonizing cliffhanger I wouldn’t dream of giving away. I will say that waiting an entire year before learning how Season 4 ties-up the loose ends might be impossible this time.

What’s ultimately really cool about The Walking Dead boxed sets is the viewer ends up, not only watching every episode back-to-back, but revisiting them more than once. Season 3 is the best one so far, and I’m hard-pressed to think of how Season 4 can possibly top it, aside from skipping AMC altogether and letting us tear into the episodes uninterrupted on video. This five disc set is a must-own.

SPECIAL FEATURES: 8 features which focus on new Season 3 characters, the deaths of old ones and the gory special effects; Audio commentaries on five episodes; 6 deleted scenes.