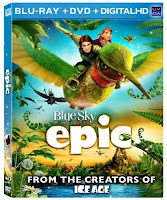 Good news first…Blue Sky Studios’ Epic is a better film than the original theatrical trailers suggested. Since feature-length traditionally-animated movies are pretty-much extinct, and the novelty of CG animation wore off a long time ago, movies like this seem to be a dime a dozen, falling in-between the mastery of Pixar and bottom-feeders like Space Chimps. Parents endure them for the sake of their kids, hoping everyone in the family will at least have enough fun to make the exorbitant admission price worthwhile (even if said-fun will likely be forgotten by everyone on the drive back home).

So yeah, Epic is a lot more ambitious than, say, Planet 51, Cloudy with a Chance of Meatballs or the entire Ice Age franchise. First of all, the movie is absolutely gorgeous to look at and obviously made for the big screen. The overall imagery is spectacular at times. As such, its visual impact will likely be greatly diminished if seen on anything less than a 40-inch TV screen.

So it’s a good thing the story is interesting, too, about 17-year-old Mary who moves in with her estranged & obsessive father after her mother dies. Dad has spent a good deal of his life trying to prove the existence of tiny people living in a nearby forest, at the expense of his family and reputation as a scientist. But Mary accidentally discovers he was right all along when. While trying to find Dad’s dog, she happens upon Tara, the elfin queen of the forest who dies at the hand of the evil Mandrake and his minions. Before she dies, Tara hands Mary a plant pod, which must bloom under the next full moon to produce another queen and keep the forest alive. But Mandrake wants this pod as well, because if it blooms in darkness, the entire forest will die (it’s not really explained why Mandrake would actually want this to happen, but never mind).

Helping Mary on this new quest are Nod, a rebellious teen who doesn’t quit fit-in with the rest of the Leafman warriors (he’s also the romantic interest), Ronin, the uber-serious Leafman leader exasperated by Nod’s flakiness but obligated to watch over him because the kid‘s father was a friend, and two mollusks (Mug & Grub) serving as comic relief.

It’s tale that has been told before, but overall, the characters, no matter how broadly-painted, are engaging. And even though the all the action is regulated to the small forest near Mary’s home, we get a sense nothing less than the fate of the world is at stake. The film is also quite funny at times when depicting what it’s like to be suddenly-rendered two inches tall.

But now the bad news…like most middle-of-the-road animated movies, Epic sometimes falls victim to its own stunt-casting. A ton of big-name celebrities lend their voices to this film for no other reason than to the allow the studio's promotional department slap their names on posters and trailers. But really, aside from Jason Sudeikis as the hopelessly out-of-touch dad, these people’s talents are completely wasted. Steven Tyler’s presence as Nim might amuse kids’ fathers, but really, the character could have been voiced by anyone. And who really cares about Beyonce in the cast when you can’t actually look at her, or Christoph Waltz if he can’t bring his personal quirkiness to the role? In fact, since we cannot see him, Waltz sounds a lot like Christopher Lambert trying to act his way through Highlander. Since no one over the age of 15 is gonna give a damn about any of these people (aside from maybe Pitbull), the casting choices are obviously - and cynically - geared to entice parents into watching it with their kids. In other words, here’s an all-star cast mostly wasted for the sake of marquee value.

More bad news…the characters of Mub & Grub, intended as comic relief (to amuse kids with obligatory gross-out humor) are seldom very funny. They are comically-rendered, but not very creatively; they’re like a low-rent Timon & Pumba, only the ratio of their screen time versus their importance to the story is severely out of whack. Still, I’m sure most children will laugh at their antics.

These brief bits of bad news aside, Epic is still an engaging film, with terrific action set-pieces, along with a story and dialogue not-likely to insult anyone’s intelligence. No, it doesn’t rank up their with the likes of the Toy Story franchise, but aside from its blatantly pandering casting choices, it’s a movie worth seeing, maybe even more than once.