WHEN THE SCREAMING STOPS* and What Barnum Said 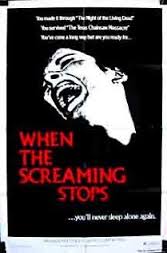 *aka THE LORELEI’S GRASP

After Dawn of the Dead, gore movies became a big thing for me & most of my friends. We saw a lot of ‘em throughout the early 80s…Zombie, The Gates of Hell, Burial Ground, Maniac, etc. Many of them oozed out of Europe (mostly Italy) with ads ballyhooing self-imposed X ratings due to violence. Most of them really sucked, too…cheap production, atrocious acting, even worse dubbing, cheesy synth-scores and an overall look similar to 70’s porno films. I often got suckered into shelling-out my hard-earned cash hoping to experience even a little of the same visceral rush Dawn of the Dead provided, but almost always ended up disappointed. That’s because Dawn, despite its carnage, was clever and funny. Most of these Euro-horror flicks were not-only imitative, but dead-serious, which made them either really depressing or worthy of MST3K-ridicule (depending on how many beers you’ve had).

These were the days before the Internet, before there was a VCR in every home, when there were suburban drive-ins dotting the country and years of exploitative European cinema swill most Americans had never heard of. We simply had no idea of the dubious origins of most of these gore-fests, so a creative film distributor could dig up one of these old fossils, repackage it with a fresh title and X rating and watch the cash roll in. Hence, a few of the movies I paid good money to see theaters were already a decade old, such as Spain’s 1974 film, The Lorelei’s Grasp. It was retitled When the Screaming Stops and released in the US in 1985, with TV & newspaper ads boasting so much extreme violence that barf-bags would to be handed out with each admission ticket.

Barf bags required! Talk about an offer you can’t refuse! Challenge accepted! Me and a few buddies from work climbed into my car with a case of beer and head to the local drive-in.

The film itself is basically a monster movie with a monster no more convincing than the Creature of the Black Lagoon, only with gore and boobs. Aside from a few notable exceptions, like The Wicker Man and Suspiria, increased boobage was arguably Europe’s most noteworthy contribution to 70’s horror. It was also obvious the Europeans were skewering eye sockets, spilling entrails and ripping-out hearts long before George Romero made such pleasantries a bit more mainstream. When the Screaming Stops is cheaply made, badly dubbed and has some of the worst special effects of any so-called ‘extreme’ horror film I’d ever seen at the time. As far as gore goes, except for a few scenes, the onscreen carnage is actually pretty tame (some challenge). Worse yet, the drive-in showing the film did not have the barf bags as advertised due to a shipping error. Damn, that was the main reason I wanted to see it!

While I was already 80% certain When the Screaming Stops was gonna be shitty anyway, movie souvenirs are too awesome to pass up. The only thing that made John Waters’ Polyester worth checking out was the “Odorama” scratch-n-sniff card which came with your ticket; when a number flashed on the screen, you scratched the corresponding number on your card to smell what was happening in the scene (including roses, pizza, farts and feet). And I would have kept mine too, if not for the fact the combination of odors from these cards was so nauseatingly nasty I ended up throwing it out the window on the way home.

Anyway, after When the Screaming Stops was over, I felt totally ripped off. Not only did I not receive my complimentary barf bag, these was nothing in the movie that compelled me to use one. All that saved the evening from being a complete waste was the co-feature, Romero’s reliable old Night of the Living Dead, which is always worth seeing again. Still, because I was a bit buzzed from all the beer, I briefly considered marching to the box office to demand a refund. I can imagine how well that would have gone over…“Hey, I got no barf bag and your movie didn’t make me sick! That’s false advertising!” Such a complaint would have been as stupid as the lady who recently tried to sue the makers of Drive because it wasn’t Vin Deisel-ly enough. 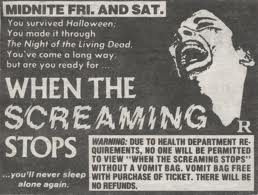 In the end, I had to accept the fact I simply got snookered, just like all those rubes in the 50s enticed by William Castle’s Macabre because a $1000 “fright insurance” policy was included with their ticket. Castle was the undisputed master of movie gimmickry. Few of his films would ever be mistaken for masterpieces, but the man was the George Lucas of hype.

Though Castle’s heyday was during the 50s and 60s, like-minded hucksters continued his legacy. For example, a guy named Allan Shackleton acquired the rights to a cheap 1971 film, Slaughter, about a Manson-like cult in Argentina, then tacked-on an ending which was supposedly a real murder committed by the film crew. Retitled Snuff and released in 1976 to capitalize on the urban legend of murders committed on camera for the sake of entertainment, Shackleton went so far as to hire people to pose as protesters and picket selected theaters where it played. What was once an obscure cheapie is now a classic example of exploitative marketing, though I imagine those who watched Snuff  back then felt as duped as I did with When the Screaming Stops; all they got for their money was a shot of animal guts ripped from a badly-made dummy. But really, what were these jilted moviegoers gonna do…complain to theater management they didn’t get to witness a murder? This was a win-win situation for Shackleton. His cheaply-acquired movie is reprehensible shit, but you have to grudgingly admire his marketing savvy; he managed to rake in a ton of cash with very little initial investment.

But the spirit of Castle & company still rears its carny head from time to time...sometimes in the most unlikely places...

For example, Discovery (the once-respected educational channel) spearheaded their most recent Shark Week programming with a two-hour “documentary” about the possibility of Megalodon, an extinct shark measuring up to 100 feet along, still lurking in our oceans. I love sharks and was intrigued enough to tune in, as were millions of others. Within minutes, however, it became obvious the entire show was fictional, with lots of over-acting, photo-shopped pictures and obviously-scripted encounters with the title creature they’re supposedly on the verge of catching. I'd been duped into watching what I thought would be a speculative documentary. Instead, Discovery jumped the shark (pun intended) with their own little version of The Blair Witch Project. As a hilarious side note, 70% of viewers still believed what they were watching was real.