SILENT RUNNING and the Kleenex Confession 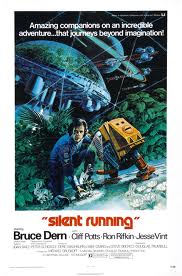 Being a guy, I don’t like to be seen crying. I’m pretty certain most other guys feel the same. Sure, we know it’s perfectly okay (and healthy) to let go of our emotions this way; it’s not a sign of weakness or vulnerability. But with the possible exception of funerals, most of us will still try like hell never to be seen with tears rolling down our cheeks. It’s okay to cry when you’re little, but the onset of puberty must awaken some dormant gene which tells our brains to keep that shit bottled-up in the company of others.

Suppressing such emotions is stupid and irrational, but I still waited until I was all by myself to tearfully mourn the deaths of Dale Earnhardt & Ronnie James Dio. I didn’t want my wife or kids to see me cry, probably because there was no way I could explain tears shed over people I didn’t know personally, no matter how important they were to me.

Then there are life’s moments which encourage happy tears, such as when my daughters were born, or their first steps, or their first choir concerts. Did I cry? Nope…not with all these people around.

That solitude is an important thing. This may be presumptuous, but I think most guys actually do appreciate rare moments when they can open the floodgates all by their lonesome. I know I do. In fact, I must confess there are times when I go out of my way to experience tearful sorrow or joy. I usually do this late at night after the family has gone to bed and allow a movie to manipulate my emotions. Yeah, movie weeping is technically a “chick thing,” which is why it’s my dirty little secret.

I blame the first movie that ever made me cry, a 1972 sci-fi film called Silent Running, in which Bruce Dern stars as Freeman Lowell, a botanist onboard one of several cargo ships carrying the last of Earth’s plant and animal life (enclosed in massive glass domes). When the crew is given orders to jettison and destroy the domes and return the ships to commercial use, Lowell goes to extremes to save the last remaining forest, killing his crewmates and changing course, hoping to disappear. A majority of the film consists of Lowell and two totally-endearing little drones (Dewey & Huey) maintaining the forest, where we grow to love this little family. But then a rescue team discovers their whereabouts, and Lowell is forced to make some heart-breaking decisions in order to save the forest.

And heart-breaking this movie is; Silent Running turned out not to be the sci-fi extravaganza I signed-on for at the age of 10 when it aired on TV. It’s a shamelessly manipulative film which forces us to, not only condone Lowell’s murder of his crewmates, but feel an enormous sense of loss with every exploding dome. Not only that, Silent Running makes us care more about the fates of two faceless, emotionless robots than most of the human characters. These elements, along with the tragic conclusion, were total Kleenex fodder for me, which I wasn’t expecting. By the time the end credits rolled, I was practically bawling and thankful everyone in the family had already gone to bed. It was the first movie that ever actually made me feel anything. But despite my sorrow, I liked how the movie made me feel.

Even today, forty years later, that ending still gets to me. I’m an English teacher, and I recently showed it to my seventh graders as part of a persuasive writing unit (where they write reviews giving their opinions of a film). Most of them were bored, even at the end, when I still had to duck out of the classroom so none of them would see my eyes welling up. Crying in front of a bunch of seventh graders would be catastrophic to my classroom management efforts. Still, I was surprised that none of them felt like I did when I first saw it. Was it because people today are more jaded & cynical, or was it me, who had since learned to happily allow movies to manipulate my emotions?

Like the few movie comedies that have truly made me laugh out loud, my list of movies which render me tearful every time is very short:

With the exceptions of The Plague Dogs & Schindler's List (both of which I’ve vowed never to see again…too devastating), these are movies I prefer to watch alone because I get weepy every time. Sure, some are effective only to me because of my headspace at the time. But others, like Field of Dreams, are a different story. Ladies, if your man isn’t vainly-attempting to mask his tears while watching this one, it’s probably time to break up with him.

Which brings me to another point, intended just for fellow emotionally-stunted guys reading this. Listen, we all know women love their men to be sensitive, so doesn’t it stand to reason letting go of our emotions over something as innocuous as a movie date would be to our advantage, especially if we haven’t previously opened up during the relationship? I know this is hard - hell, it’s difficult for me and I’ve been married 25 years - but what if you arranged an in-home date night, rented Bambi and squeezed-out a single tear when his mother gets shot? Odds are you two will be naked on the couch before the end-credits roll.

Still, we hesitate. Allowing ourselves to cry during something as meaningless as a movie remains especially forbidden, even though doing so would likely get us laid six ways from Sunday.

I have Silent Running in my collection, and successfully fought tears when I introduced it to my wife several years ago. Still, I sometimes wonder what would happen if I popped it into my DVD player tonight. She’d likely be in the same room, engrossed in a Charlaine Harris novel. If I started to openly weep during the climax, I’d like to think she’d be so enamored with my sudden display of sensitivity that she’d toss aside her book to engage in some red hot monkey sex.

Alas, that remains a dream, because I still can’t bring myself to cry around her.
Posted by D.M. Anderson at 10:42 PM