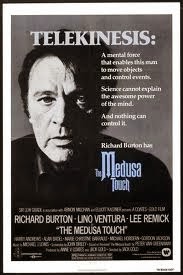 I remember when Paul Newman died. I felt kinda sad because he starred in some of my favorite films growing up, like The Towering Inferno, Butch Cassidy and the Sundance Kid and Slap Shot. Sure, he’d been in dozens of classics before then, but the 70s were my formative years and, unlike Richard Burton, whose film career was winding down (Exorcist II, anyone?), Newman was still a huge and respected star.

I teach middle school, and I mentioned Newman's passing to my students the day after he died. None of them even knew who he was until I added he was the voice of Doc Hudson in Cars. Why would they? He was never part of any other film that would appeal to them. Still, it was kind-of depressing. The passing of an icon is always sad, but you really feel your age when you realize that person is no longer an icon to everyone.

Similarly, I didn’t know Richard Burton from Richard Petty when I was in middle school. My first exposure to him was in The Medusa Touch, only because it was a movie that looked all kinds of awesome…a mash-up of supernatural horror and epic disaster. Those were my two favorite genres, and both huge in the late 70s. I didn’t give a damn who the actors were…I just wanted to watch a plane slam into a skyscraper because some twisted old dude willed it to.

Burton plays John Morlar, a reclusive and unstable writer who confides in his psychiatrist (Lee Remick) that he has a telekinetic talent for causing disasters (a trait he’s had since birth). Anyone who pisses him off (parents, teachers, neighbors, bosses) meet terrible fates soon after. Morlar is nearly murdered in the opening scene. Through flashbacks and an ongoing investigation into the crime by Detective Brunel (Lino Ventura), we learn how powerful Morlar’s wrath can be. After the aforementioned plane crash, even though he’s on life-support in the hospital, Morlar’s rage continues, causing the destruction of  London’s Minster Cathedral and a nuclear meltdown.

After a somewhat slow start involving the investigation, The Medusa Touch is a lot of morbid fun. Despite the seriousness of the story, some of the early, less spectacular deaths seem intentionally comical. Still, the major appeal of the movie lies in the more epic scenes of destruction. The plane crash is phony-yet-cool, kinda like the train wreck in The Cassandra Crossing…we know we’re watching miniatures blowing up, but the attention to detail is similar to the fun of gazing into an immaculately-detailed dollhouse. The effort it takes for special effects guys to create scenes like this is far more fun to watch than a modern-day computer geek putting something similar together on a laptop.

Then there’s Burton. Like I said, I didn’t know who he was back then, but there’s one single scene about midway through that convinced me he was pretty cool. As Morlar comes home, he discovers his cheating wife getting ready to leave with her new boy-toy. On the way out the door, she chides, “Don’t expect me to come back.” With a steely gaze and only the slightest hint of a smile, Morlar calmly replies, “I won’t.” I love that scene, chilling and hilarious all at once, simply because of Burton’s performance.

That was all it took for me to pay more attention to other old Richard Burton movies showing up on TV (Cleopatra, Where Eagles Dare, etc.). I mostly came away thinking Richard Burton pretty-much played the same character in all his roles, but hey, isn't that what Harrison Ford does now?

I’m sure some of my students will eventually stumble across classic films and realize Newman did a lot more than provide a voice in Cars. Similarly, I hope they’ll discover an actor like Robert DeNiro was once much more than the paranoid father-in-law in Meet the Parents. But will they embrace classics like Goodfellas or Cool Hand Luke with the same level of love? That’s hard to say, because although Richard Burton has appeared in more than his share of classics, The Medusa Touch remains my favorite, simply because that was his first movie which ever made an impression on me...both his performance and the bitchin' scenes of destruction.

Despite my obvious nostalgic fondness for this film, The Medusa Touch at least deserves to be remembered as a movie which had the audacity to combine the terror of The Omen & Carrie with the visuals of Earthquake & The Towering Inferno into a single outrageous, flamboyant spectacle.
Posted by D.M. Anderson at 9:52 PM