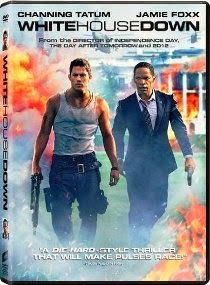 With hindsight, White House Down was doomed to fail. Not only did it get lost in an already-crowded summer movie season of superheroes, animated sequels, raunchy comedies and horror films, it was the second of two action movies released this year with the exact same plot. The first, Olympus Has Fallen, came out in the spring with little or no box office competition and was a moderate hit. While it was a well-made and entertaining time killer, there was nothing special about it. The success and failure of both movies was obviously a matter of timing.

Kinda sad, really, because White House Down is actually the better of the two, which is saying a lot because I really liked Olympus Has Fallen. I truly appreciated the R-rated intensity of Olympus, making it a decent Die Hard rip-off. White House Down is more blatantly ridiculous, but because it has a lot more humanity, clever character banter and humor, it’s more of a kindred spirit to Die Hard than a mere clone.

In this one, Channing Tatum plays John Cale, a state capitol police officer who hopes to become a secret service agent. His estranged daughter (of course) is on-hand to tour the White House while he’s failing his job interview. That’s when rogue mercenaries, led by disgruntled government head Martin Walker (James Woods), lay siege to the White House. Like most films of this type, the initial reason for the siege is just a ruse for a more ominous agenda, but never mind that. What’s ultimately important, from an entertainment standpoint, is that Cale is forced to, not only protect President Sawyer (Jamie Foxx), but kill as many evil sleazy, black-vested bad guys as he can in order to save his daughter.

It’s a pretty generic Die Hard story, but made a bit special by director Roland Emmerich. Yeah, I said it…Roland Emmerich, the same guy who directed Independence Day, Godzilla, The Day After Tomorrow and 2012, the same guy who’s typically listed by pompous critics as one of those blockbuster directors responsible for the dumbing-down of modern American movies. While part of me wants to agree with those critics, I have to admit, despite their idiocy, his films are always a lot of fucking fun (yeah, even Godzilla). And even though most of his movies run well-over two hours, they never feel that long. A film like White House Down is no exception and he puts his stamp all over it.

So yeah, the movie is big, dumb, loud and total cotton candy for the brain. But hey, who doesn’t love cotton candy? This film didn't deserve its unceremonious death at the box office. So do yourself a favor...pick it up, put it in and crank up the volume.