News: THE SEVEN-UPS is Coming to Blu-Ray and All is Right with the World 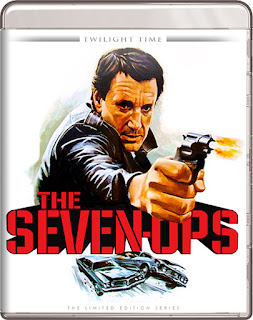 With all due respect to the late, great John Frankenheimer, I've always considered The Seven-Ups to be the real French Connection II. Much more similar in tone and execution to the William Friedkin film, original French Connection producer Philip D’Antoni takes the director's chair (the only time in his career) for this underappreciated classic. Roy Scheider also returns, this time as Buddy Manucci, who leads a crack team of renegade cops known for taking down some of New York's worst criminals.

No Antoni production would be complete without a jaw-dropping extended car chase, and The Seven-Ups features one just as gripping as those in Bullitt and The French Connection (and all three were orchestrated by legendary stunt coordinator Bill Hickman).

Now my wish list has been shortened by one title because The Seven-Ups is finally coming out of Blu-Ray. The good news is that the disc is also loaded with bonus features (listed below). The bad news...being a Twilight Time release, this is a Limited Edition of only 3,000 copies. So maybe I should shut up and stop telling you about it.

EXTRA KIBBLES
FEATURETTES: The Seven-Ups Connection / A Tony Lo Bianco Type / Real to Reel / Cut to the Chase / Anatomy of a Chase: Behind the Scenes of the Filming of The Seven-Ups