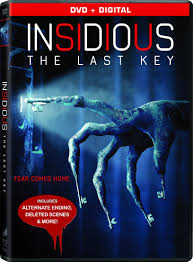 I have a soft spot for the Insidious franchise because the original was the first movie to terrify my youngest daughter, Lucy. It also made her a horror fan for life (much like Halloween did for me a thousand years ago). Ever since, the two of us have looked forward to each new installment. While no Insidious film has been worth the effort & expense of seeing in theaters, they make great late-night couch potato fodder.

These films are nothing if not consistent and Insidious: The Last Key is no exception. The series' overall narrative timeline dictates that this one, like the previous film, is another prequel, with everyone's favorite senior scream queen, Lin Shaye, returning as paranormal exterminator Elise Rainer.

This time, however, the fight is more personal. Elise returns to her childhood home after the current owner requests her services. She's initially reluctant, for reasons provided by harrowing flashbacks involving her abusive father, as well as the death of her mother from a key-fingered demon (which is suitably creepy, though not as memorable as "Lipstick-Face" from the original). Aided once again by her longtime comic-relief sidekicks, Tucker & Specs, Elise discovers her father had an even darker past than she could imagine, which is directly tied to the house's sinister history.

Longtime Insidious fans should know what to expect: an overall creepy atmosphere, plenty of jump scares, a return trip into The Further and yet-another earnest performance by Shaye. Along with a few narrative surprises, we also meet Elise's estranged brother, Christian (Bruce Davison) and his two daughters, Melissa and Imogen, the last of whom share's her aunt's unique gift (perhaps so she can take the reigns after Shaye hangs up her spurs).

Insidious: The Last Key doesn't re-invent the wheel or take the franchise in new directions. Nor, I suspect, would viewers like Lucy want it to. Even at her tender age, she's already seen enough horror movies to know the bad ones far outnumber the good ones, which is especially true when it comes to sequels. So when one delivers exactly as expected, it's hard to complain too much..