Blu-Ray Review: WHILE THE CITY SLEEPS 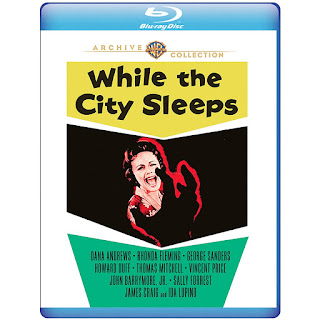 So what does happen while the city sleeps? Plenty, and none of it good...

There's a serial thrill-killer (John Drew Barrymore) who preys on young women in their apartments. At the scene of his latest kill, he scrawls a cryptic message, "Ask mother," on the wall with lipstick, prompting the press to dub him the Lipstick Killer.

Meanwhile, Kyne Inc., one of the city's media empires, is thrown into turmoil after its owner suddenly dies. Kyne's son and heir, Walter (Vincent Price), is an arrogant douchebag who uses the Lipstick Killer story to manipulate three of his greedy underlings into competing for second in command. One newsman who wants no part of this is Edward Mobley (Dana Andrews), who seems more concerned with catching the killer than getting a promotion and keeps abreast of the investigation through a friend on the force, Lt. Kaufman (Howard Duff).

Not much sleeping gets done in this city (though there's some sleeping around) as everyone undermines each other's attempts to be promoted, to the point where the film sometimes plays more like a soap opera than hardcore film noir. Still, the story and its various subplots are just interesting enough to keep our attention until this perpetually perspiring perve strikes again. Good performances help, of course. Andrews' no-frills acting style serves his character well, while Rhonda Fleming & Ida Lupino make terrific temptresses who are as conniving as they are easy on the eyes. Sally Forrest, on the other hand, is duller than dishwater as Mobley's fiancée, (no wonder Lupino is able to lead him astray).

A relatively minor late-career directorial effort from the great Fritz Lang, While the City Sleeps is nevertheless an engaging potboiler. Though not particularly memorable, it's efficiently-made, fast-paced and sometimes quite humorous. Calling the film a timeless classic is a stretch, but it's entertaining in-the-moment and looks great on Blu-Ray.