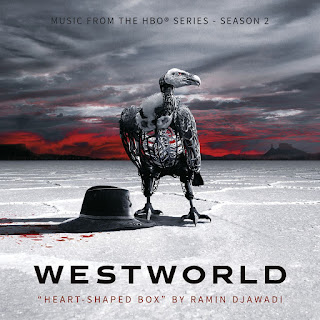 HEAR “HEART-SHAPED BOX” AS HEARD IN THE OFFICIAL
WESTWORLD SEASON TWO TRAILER
MUSIC BY MULTI GRAMMY AND EMMY AWARD-NOMINATED COMPOSER
RAMIN DJAWADI
The official Westworld Season Two trailer features a new version of the song “Heart-Shaped Box” (originally performed by Nirvana) by multi-Grammy and Emmy Award-nominated composer Ramin Djawadi (Westworld, Game of Thrones), now available to stream and for purchase. Full details for the album Westworld Season 2 (Music From The HBO Series) have yet to be announced. Upon hearing “Heart-Shaped Box,” Westworld fans will be thrilled to hear Djawadi continuing his masterful re-imagining of classic songs as he did in Westworld Season One.
Posted by D.M. Anderson at 11:17 PM